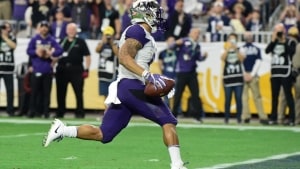 
SEATTLE  — Myles Gaskin happened to be in Idaho for a wedding during the summer and was staying close enough to the Boise State campus to take a stroll past the football stadium one night.

It provided Gaskin a moment to reflect on his first three seasons at Washington and an unexpected, record-setting career that started inside the blue-field stadium on a night where he finished with just five yards rushing on five carries.

The wait is almost over.

While it may sound like his college career is over, there’s plenty more for Gaskin to accomplish beginning on Saturday when No. 6 Washington faces No. 9 Auburn in Atlanta. Gaskin begins his senior season on the cusp of becoming Washington’s all-time leading rusher. He already holds school records for rushing touchdowns and total TDs and could become the 10th player in FBS history to rush for at least 1,000 yards in each of four seasons.

His 4,055 career yards rushing are the most for any returning FBS player entering the 2018 season.

“When you see his game, you could tell he’s more of an aggressive runner than people actually think,” Auburn linebacker Deshaun Davis said. “On paper, you think he’s more of a speed guy; he has speed, but Washington runs a lot of power. They run the counter game really well. He can hit downhill but make no mistake about it: If you give him the edge, he’s going to take it.”

Going on 13 years the standards & expectations have not changed!! This is a great program for a person that wants to be great all around!!! #B4L pic.twitter.com/OJ0SUrCRSm

Gaskin won’t be carrying the load by himself. While the past two years have seen Gaskin combo with bulldozing running back Lavon Coleman to form Washington’s running tandem, this year the Huskies will also feature speedy sophomore Salvon Ahmed, who nearly mirrors Gaskin in size and, depending on the time and day, may be faster — or a tick slower— than his counterpart.

Ahmed flashed at times last year during his freshman season, but his contributions were mostly limited to just that — flashy moments that came and went without much consistency. He got just 61 carries but averaged 6.4 yards per rush.

It was his final regular-season game of 2017, when Ahmed averaged nearly 10 yards per carry in an Apple Cup win over Washington State, that created the excitement that has carried over into this season.

“I know he got to play last year but he didn’t get to play a lot, just being honest. He got to see other guys play and I think he got a good feel for it and I think he’s ready to take the next step,” Gaskin said.

WATCH: Who are the nation’s top quarterbacks this season?

How big of a step Ahmed can take could determine how potent Washington is offensively. The Huskies know what they have with Gaskin and fourth-year quarterback Jake Browning. But a big question going into the opener against the Tigers is: Who can be that other big-play threat for their offense?

“I think we both just have a lot to bring to the table. Both work hard and just kind of do what we do on the field,” Ahmed said of his partnership with Gaskin. “At the end of the day it’s football. Either of us can make a play and we’ve been practicing great as an offense. If we make a play it’s because of the guys up front. I think we both are going to make a lot of plays.”

This article was written by Tim Booth from The Associated Press and was legally licensed through the NewsCred publisher network. Please direct all licensing questions to legal@newscred.com.