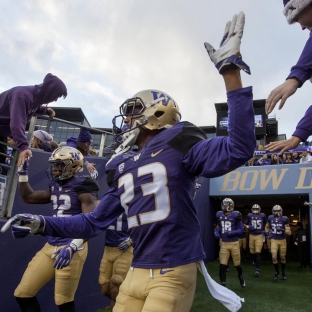 Fall camp begins Monday for the defending Pac-12 champion Washington Huskies, who appear poised for another run at the league title in 2017. Here are five storylines to monitor as practices get under way.

1. The Huskies’ backfield is more than just Myles Gaskin and Lavon Coleman

Gaskin and Coleman formed one of the nation’s most productive running-back duos last season, combining for 2,225 yards, 17 touchdowns and an average of 6.3 yards per carry — in fact, Coleman’s average of 7.47 yards per carry ranked second in the Pac-12.

Both are back this season. And if Gaskin and Coleman were all the Huskies had, they would be in great shape. But there should be quite a bit of depth behind those two. Sean McGrew, a redshirt freshman and the former California Gatorade Player of the Year, had an impressive spring and should find a role in the offense somewhere. Fellow redshirt freshman Kamari Pleasant had his moments in spring, too, and incoming freshman Salvon Ahmed, one of the jewels of this year’s recruiting class, is an elite athlete who should be among the few first-year players to compete for immediate playing time.

Gaskin and Coleman seem set in their status as a 1-2 punch. But McGrew, Pleasant and Ahmed will likely battle for the remaining carries, and fall camp — once the pads come on and live repetitions are possible — should help determine that pecking order.

“The kids we redshirted, and Salvon coming in, that’s a strong crew right there,” UW coach Chris Petersen said. “Those guys will be good. It starts on the O-line. You want to talk about the run game, that’s where we need to start and finish with, is the O-line. The backs will do their own thing.”

First, it was Hau’oli Kikaha. Then, Travis Feeney. Then, Joe Mathis. Whomever defensive coordinator Pete Kwiatkowski has lined up at buck linebacker has thrived at the edge-rushing position. And the other outside linebacker spot — the SAM — has been helpful in the pass rush, too.

Yet again, the Huskies enter fall camp in need of replacing some production at those edge-rushing positions. They do have some starting experience; fifth-year senior Connor O’Brien started seven games last season and totaled three sacks at buck linebacker in place of Mathis, who missed the Huskies’ final eight games due to injury.

O’Brien sat out of spring practices while recovering from a knee injury, but should be good to go for fall camp. Third-year sophomore Benning Potoa’e, who started the Pac-12 championship game against Colorado last season, should provide competition for the starting buck spot, and redshirt freshman Myles Rice took many reps with the first-team defense during the spring.

The SAM position seems more settled: junior Tevis Bartlett was by far UW’s most effective pass rusher during the spring, and after totaling 26 tackles, nine tackles for loss and four sacks in reserve duty last season, he appears ready for a breakout season as a starter in 2017.

3. New starters in the secondary

Yes, the Huskies lost three starting defensive backs — Kevin King, Budda Baker and Sidney Jones — each of whom were selected in the second round of this year’s NFL draft. But they seemed to sort out at least two of those positions during the spring, with junior Jordan Miller and redshirt freshman Byron Murphy establishing themselves as the top two cornerbacks on the team, though if third-year sophomore Austin Joyner can stay healthy, he should challenge for playing time, too.

That doesn’t mean everything is settled, though, and that might not be such a bad thing. Jojo McIntosh, a fourth-year junior, returns as the starting strong safety, and Taylor Rapp, the defending Pac-12 Defensive Freshman of the Year, is versatile enough to play wherever the Huskies need him. Ezekiel Turner, now a senior, is a big hitter and provides some valuable depth at safety, as well.

But the Huskies often play nickel, and there will be competition for that position. Sophomore walk-on Myles Bryant played there some in the spring, and incoming freshman Elijah Molden, the heralded cornerback recruit from West Linn, Oregon, is reputed to have the talent necessary to play right away. If he picks up the defense quickly enough, the nickel spot could be the perfect way to get him on the field in Year 1.

“This is kind of one of the exciting things I think about college football; that you lose these players and you’ve got to replace them,” Petersen said. “I think what’s exciting is when you’ve got some guys that are talented, that care, (and) you’ve seen them do some really good things, and now it’s a matter of building that consistency.”

4. No John Ross, but more depth at receiver (and a new, touted tight end)

Ross was a special receiver, and losing him will change the way the Huskies offense has to operate. But the news isn’t all bad at receiver. The Huskies not only return senior Dante Pettis, who tallied 822 receiving yards and 15 touchdowns last season, but also return junior Chico McClatcher and a handful of other receivers — Aaron Fuller, Quinten Pounds, Andre Baccellia — who got their feet wet last season and will prepare for bigger roles in 2017. Don’t forget about Brayden Lenius, either.

The Huskies also add three highly-recruited freshmen to their receivers corps — Ty Jones, who enrolled early and participated in spring practices, plus Alex Cook and Terrell Bynum. The true freshman pass-catcher who could have the biggest impact, though, might be former Eastside Catholic star Hunter Bryant, who caught 56 passes for 979 yards and 10 touchdowns as a senior in high school and comes equipped with a college-ready body. He’ll compete for playing time with returning tight ends Drew Sample, David Ajamu and Will Dissly.

5. Power and experience up the middle

In addition to McIntosh and Rapp anchoring the middle of UW’s defensive backfield, the Huskies are also strong up the middle up front and at linebacker.

Azeem Victor and Keishawn Bierria, both fifth-year seniors and All-Pac-12 candidates, return to man the middle and weakside linebacker spots, respectively. Fourth-year junior Vita Vea has the brute strength to play nose tackle and the athleticism to play anywhere else on the defensive line, and will team with fellow fourth-year junior Greg Gaines — who sat out spring while recovering from surgery but should be good to go for camp — to anchor what should again be a strong defensive line despite the loss of fifth-round NFL draft pick Elijah Qualls.

After leading the Pac-12 in yards-per-rush allowed last season at 3.65, the Huskies have the personnel necessary to be just as stout against the run this year.

This article is written by Christian Caple from The News Tribune and was legally licensed via the Tribune Content Agency through the NewsCred publisher network. Please direct all licensing questions to legal@newscred.com.