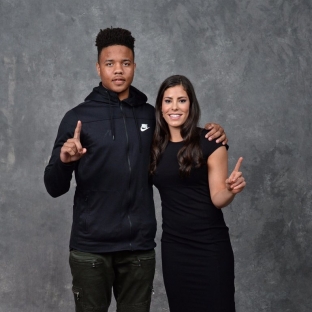 SEATTLE, Wash. – Following Thursday’s NBA draft, the University of Washington became the first school to produce the top pick in the NBA and WNBA drafts in the same academic year as Markelle Fultz joined Kelsey Plum as the first overall draft pick.

The duo not only made history as the first tandem of top picks in the WNBA and NBA drafts to come from the same school, but also from the same conference.

Plum, the 2017 consensus national player of the year and NCAA all-time scoring leader, was the first pick of the WNBA draft by the San Antonio Stars in April. Fultz, a third team All-American from both the AP and the National Association of Basketball Coaches, was drafted as the number one overall pick in the NBA Draft by the Philadelphia 76ers.

Both Plum and Fultz are the first No. 1 draft picks in Washington basketball history. Plum became the fourth women’s basketball player from the Pac-12 Conference to be selected No. 1 as Fultz became the third on the men’s side.