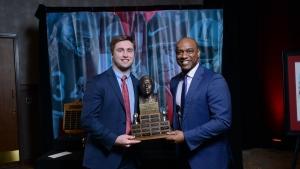 
The Walter Payton Award is given each year to the most outstanding offensive player in FCS football. The 2019-20 winner, to be announced in January during FCS championship week, will be the 33rd recipient in award history.

Here’s everything you need to know about the annual honor, presented by STATS FCS.

FCS Walter Payton Award: What is it and who is it named after?

The Walter Payton Award debuted in 1987 to honor the most outstanding player in the Football Championship Subdivision. In 1995, with the introduction of the Buck Buchanan Award for top defensive player, the Payton Award was altered to only recognize the top offensive player.

A national panel of more than 150 sports information and media relations directors, broadcasters, writers and other dignitaries vote on the award’s winner, based on players’ regular-season performances. Voting is conducted before the start of FCS playoffs.

The Walter Payton Award is one of five national awards announced by STATS FCS:

The offensive player of the year award’s namesake, Walter Payton, was an NFL legend with the Chicago Bears, earning nine Pro Bowl trips, 1977 MVP honors and a 1986 Super Bowl ring. The all-time great running back began his journey at FCS program Jackson State from 1971-74.

FCS Walter Payton Award: When is the winner announced?

The Walter Payton Award winner is revealed annually at the STATS FCS Awards Banquet and Presentation on the eve of the FCS championship game in Frisco, Texas. The 2019-20 recipient will be announced Jan. 10, 2020.

All five STATS FCS national honors are celebrated at the banquet, though the Jerry Rice, Eddie Robinson and Doris Robinson winners are all announced ahead of time. The Payton and Buchanan award winners are revealed for the first time as part of the ceremony.

The first Walter Payton Award watch list is released in the preseason by STATS FCS. The 2019-20 preseason watch list comes out Wednesday, July 31. The list will have updates periodically throughout the regular season, culminating in three finalists that will be invited to attend the banquet.

Quarterbacks have accounted for a position-best 21 winners since the award debuted in 1987. Nine running backs and two wide receivers have also been honored. Eastern Washington and Villanova lead all schools with three winners apiece.

Only two players have lifted the hardware in consecutive years: Appalachian State standout quarterback Armanti Edwards won in 2008 and ’09, and Sam Houston State QB Jeremiah Briscoe took it home in 2016 and ’17.