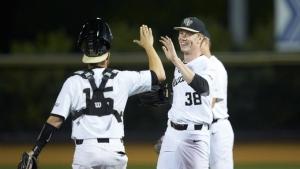 
Bobby Seymour and Chris Lanzilli headline a fearsome Wake Forest offense that has a very real chance to be the nation’s best. If the talented pitching staff can live up to its potential, the Demon Deacons have Omaha upside and strong reason to be named the 18th-ranked team in D1Baseball.com’s preseason top 25.

Below are a few facts to consider when breaking down the 2020 Wake Forest team:

In this preview of Wake Forest’s 2020 season, we’ve graded the Deacons in each characteristic of the game: Hitting, power, speed, defense, starting pitching, bullpen and experience/intangibles. But before we begin, let’s present our projected lineup for Wake Forest in 2020.

Wake Forest didn’t live up to last season’s No. 20 preseason ranking — but it wasn’t because of the offense. The Deacons actually exceeded our robust expectations offensively, leading the ACC and ranking 12th nationally in scoring.

With seven experienced and talented regulars back in the fold, the Demon Deacons have a very real chance to be the best offensive club in college baseball in 2020. Leading the way is reigning ACC Player of the Year Bobby Seymour, a strong-bodied left-handed hit machine who led the nation with a ridiculous 92 RBIs last year. Fellow slam-dunk preseason All-American Chris Lanzilli is a similarly talented pure hitter with serious strength from the right side. Shane Muntz also hit for both power and average last year and should do so again; he’s also the most patient hitter of the bunch, and his .477 OBP led the team in 2019. The 6-foot-4, 235-pound Will Simoneit is yet another very physical, mature right-handed hitter who performed for three years at Cornell. He’ll be a valuable addition to this team, giving the Deacons yet another offensive threat in the lower part of the lineup.

WATCHLIST: Which Deacon outfielder lands himself on the National Player of the Year watchlist

Michael Ludowig has All-America upside if he can take another step toward truly harnessing his five-tool ability, which includes a live left-handed bat. Brendan Tinsman and Michael Turconi were both solid as freshmen and have legitimate star potential as well. Turconi needed to get more physical after wearing down a bit last year, and he added 10-15 pounds of muscle in the offseason, which should allow him to rack up doubles. He’ll also serve as the patient, slashing catalyst atop the order.

Christian Long is a veteran “program guy” who seemed to turn a corner in the fall after getting his body into better shape and making some swing changes to keep his barrel in the zone longer. The Deacons hope he can grind out at-bats and turn the lineup over from the 9-hole, but he’ll have to withstand competition from promising freshmen Derek Crum and Adam Cecere.

DJ Poteet also made significant swing changes after a brutal sophomore slump, focusing on getting into his legs more, staying more under control and shortening his stroke. He’s back to switch-hitting, and Wake is optimistic he can get back to being the useful offensive contributor he was as a freshman, when he posted an .847 OPS.

If you’re the betting type, consider placing a wager on Wake Forest to lead the nation in home runs this year. Sure, the Deacons play in a bandbox that always enhances their power numbers — but this exceptionally physical bunch has the strength to make just about any ballpark look small. Lanzilli, Muntz and Tinsman all smacked double-digit homers a year ago, and all three of them could make a run at 20-plus this spring because they have serious right-handed juice.

The burly Seymour led the squad with 20 doubles last year ago. His lefty power has never been in question, and he seems like a shoo-in to significantly boost last year’s nine-homer total. Simoneit is in the similar mold but from the right side — a big-bodied doubles hitter with the strength to crank double-digit long balls. Ludowig has long flashed above-average left-handed power potential in batting practice, and he showed signs in the fall of putting it to better use in game action, doing a better job elevating the ball to his pull side. The long-levered Poteet hit nine homers as a freshman and could certainly reach double figures as a junior if he can carry his fall success into the spring.

As powerful as this team is, don’t expect it to run much. The Deacs do have a couple of above-average to plus-runners in Turconi and Ludowig, while the long-striding Poteet is a solid-average to above-average runner underway. And a couple of the behemoths in the lineup move well enough for their size, particularly Lanzilli and Simoneit. But expect a lot more slow trots around the basepaths than stolen bases — in fact, last year Wake had 77 homers and just 37 steals.

The Deacs ranked 10th in the ACC and 154th nationally last year with an unsightly .967 fielding percentage last year. Defense doesn’t figure to be a major strength for this team either, but it should be decent enough.

Standout shortstop Patrick Frick is gone, but Wake shouldn’t lose a thing defensively by sliding Turconi from second to short. He had a great summer with the Amsterdam Mohawks, where he played short every day and showed off great feet, hands and instincts as well as plenty of arm. Poteet spent his first two years in center field before moving to second base in the fall and surprising coach Tom Walter with how well he handled the position. A high school shortstop, Poteet’s strong arm helps him turn the double play well, and he’s shown decent actions — but still, he’s something of a question mark at his new position heading into the spring.

Seymour is fine at first base, and Simoneit has a rifle arm and good body control at third base, though he’ll also spell Tinsman behind the plate. Walter said Tinsman has really matured defensively as a sophomore, taking more of a leadership role and polishing up his catch-and-throw skills — and his defensive development is a big key for this club.

When Simoneit catches, don’t be surprised if Lanzilli slides to third base, where he got some action in the fall and showed off promising instincts and good arm strength, though his actions surely need refinement. Lanzilli is a sound defender in the outfield corners, and Ludowig is a standout with range and arm strength in center. Long or Crum should be very reliable in the other corner.

This grade might wind up selling the Deacons short because they have four very talented arms projected to start — but we need all of them to prove they can live up to their potential. We’re betting on junior Jared Shuster to pitch on Fridays, coming off a breakout summer in the Cape Cod League (1.40 ERA and a 35-5 K-BB mark in 32 innings), but Wake might also opt to go with Shuster on Saturdays to break up righties Ryan Cusick and Will Fleming.

Shuster attacked the zone at 90-92, touched 94 last summer and showed the makings of a plus changeup and above-average breaking ball, but his velocity took another jump when he came back from winter break throwing 94-96. The 6-foot-6 Cusick arrived at Wake as a fireballer who dominated high school hitters with his fastball, but he developed much better feel for pitching as the season progressed. He’s 15-plus pounds of muscle, so he shouldn’t wear down in the second half like he did last spring, when his velocity dipped from the 95-96 range to 90-92. He’s also improved his breaking ball and changeup, giving him a chance to make a big leap as a sophomore.

BRINGING THE HEAT: 22 college baseball flamethrowers who topped 96 this fall

Fleming and fellow junior righty Antonio Menendez both shined in the Wake bullpen last year, but now they’re expected to move into starting roles. How they handle that transition will be vital for Wake’s success. The 6-foot-6, 215-pound Fleming ran his heater up to 97 last year, and Walter said it would not surprise him to see the righty touch 100 as a junior — it’s that kind of arm. He also flashed an above-average slider and developed a legitimate third weapon in his 82-84 changeup with good arm speed, sink and fade, so he has the arsenal to be a true frontline starter. And Menendez offers a completely different look as a slot-shifter who can go from high three-quarters to sidearm with good sink and the ability to spin a swing-and-miss slider.

Walter believes his pitching staff goes comfortably 10 deep. Ultimately, the bullpen should be a strength, but it lacks a proven closer. The favorite for that job is Shane Smith, who missed last season due to injury but came back strong in the fall. With a long, loose arm swing and a high slot, Smith worked downhill at 89-91, showed a good downer curveball at 75-78 with good depth and feel for a firm but effective changeup at 84-85. His fastball also plays up because of its high backspin rate and ability to locate it effectively.

Seniors Bobby Hearn and Tyler Witt give Wake Forest two battle-tested, valuable options from the left side, and both of them pitched great down the stretch last year. Hearn attacks at 88-89 with a good, big-breaking 1-to-7 curveball at 74-76. Witt presents a different look, a low three-quarters slinger with devastating sink on his 86-88 fastball and a useful slider.

Redshirt freshman left-hander Brennen Oxford is the wild card; he was one of Wake’s biggest surprises this fall, with a tight breaking ball around 2700 rpm that Walter called “a serious pitch” and the ability to locate with a fastball up to 91, as well as an improving changeup. The Deacons could opt to use Oxford on Tuesdays, which would allow either Menendez or Fleming to go back to the bullpen, making the staff better on weekends.

From the right side, graduate transfer Riley Myers (from Catawba, N.C., College) showed an 89-90 fastball this fall and flashed a very good short, hard slider at 83-84, which should make him a good righty matchup guy. And junior two-way talent McNamee figures to be a key setup piece thanks to his 91-92 fastball and ability to miss bats with a short slider at 83-86.

Wake Forest has seven everyday regulars back plus four rotation candidates who all have solid experience (albeit not necessarily as weekend starters) and a pair of reliable veterans anchoring an otherwise unproven bullpen. But the fact is, none of the juniors have ever experienced postseason baseball, as disappointing pitching torpedoed last year’s promising season.

We firmly believe in Wake Forest’s talent; the only reason this team isn’t ranked even higher is because it hasn’t done it yet. But given the talent, depth and experience of this roster, it’s frankly hard to envision this year’s Deacons falling short of the postseason.