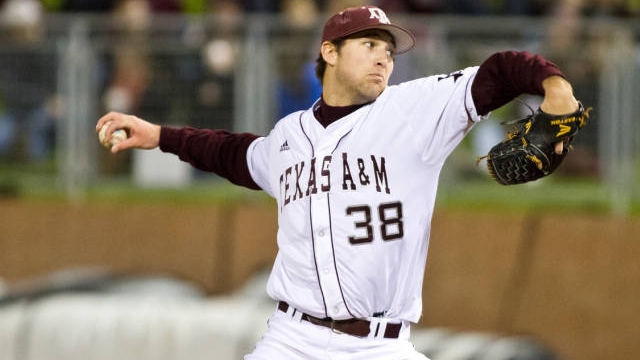 Vote: Does Texas A&M or Michigan have a better NFL/MLB/NBA trio? (Semifinals)

It’s time to round out the final pairing to decide which school has the top current trio of pros. Texas A&M won its quarterfinal matchup handily against in-state foe Texas (70 percent of the vote) while Michigan sqeaked by UCLA with 55 percent of fan votes.

Read below to see who represents these two schools’ trios, then submit your vote on Twitter with the hashtags #TAMUTrio or #MichTrio.

Before Miller became one of the most terrorizing pass rushers in the NFL, he was a four-year stud within the Aggies’ front seven. He tallied 33 sacks and had 50.5 tackles for loss while shifting between defensive line and linebacker at Texas A&M. His 17 sacks in 2009 led the nation. Now with the Broncos, who drafted him No. 2 overall in 2010, Miller has recorded double-digit sacks in five of his first six seasons. This year, he’s already gotten to the quarterback seven times and has one forced fumble. In the Broncos’ Super Bowl 50 victory in 2016, Miller had 2.5 sacks and was named the game’s MVP.

Wacha was 18-7 with 336 strikeouts in 348.2 innings pitched in three seasons with the Aggies. In his 2011 sophomore season, he helped lead Texas A&M to its first CWS appearance in 12 years. Wacha started one game in Omaha, pitching 6.2 innings of four-run ball, earning the loss against Cal. Wacha was a first-round draft pick after his 2012 junior season and debuted with the Cardinals just one year later. He emerged as a playoff hero and was named NLCS MVP in 2013. In 2015, Wacha went 17-7 and earned his lone All-Star nod to date.

Jordan finished his one season at College Station with 7.9 points, six rebounds and 1.3 blocks per game as a part-time starter for the 25-win Aggies who advanced to the second round of the NCAA tournament. Jordan then declared for the NBA draft and was selected 35th overall (second round) by the Clippers. In nine full NBA seasons, Jordan is averaging 9.1 points and 10.2 rebounds per game. The 6-11 center is a two-time All-Defensive selection and was a first-time All-Star last season.

Brady saw action in 29 games over four years with the Wolverines and was the regular starter in 1998 and 1999. He finished with 4,773 passing yards and 30 touchdowns with a 61.9 completion percentage while donning the Maize and Blue. He was then famously taken in the sixth round (199th overall) in 2000 by the Patriots, the seventh quarterback off the board, and blossomed into a five-time Super Bowl champion, 12-time Pro Bowler and two-time MVP. At 40 years old, Brady is leading the league in passing yards

The Dodgers lefty hurler became a full-time starter for the Wolverines in 2001 and was 6-12 with a 3.70 ERA over his final two seasons in Ann Arbor. In his 2002 junior season, Hill finished with eight complete games and two shutouts en route to becoming a fourth round pick by the Chicago Cubs. Hill is 50-36 in parts of 13 MLB seasons and has reinvented himself into a top-end starter over the past two seasons with the Dodgers, where he is 15-10 with a 3.02 ERA.

Crawford averaged 16.6 points and nearly five assists per game in his one season at Michigan, where he played in 17 games. He led the Wolverines in points per game and was second in assists and third in blocks (0.9 per game). Crawford then became the eighth overall pick and has played for seven different NBA teams in 19 years. Known for his 3-point stroke and superb ball-handling — even at age 37 — Crawford is a three-time Sixth Man of the Year.