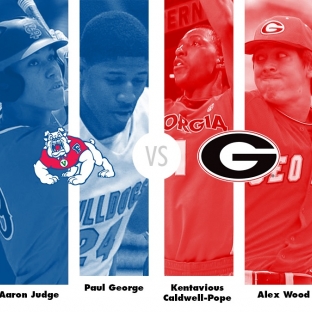 Vote: Does Fresno State or Georgia have a better NFL/MLB/NBA trio?

The first matchup in our quest to determine which school has the best current professional trio is a Battle of the Bulldogs.

Both Fresno State and Georgia have top-level quarterbacks and first-time 2017 MLB All-Stars. Fresno State adds one of the marquee names in the NBA right now while Georgia was home to a former SEC basketball player of the year.

Read below to see who represents these two schools, then submit your vote on Twitter with the hashtags #FresnoTrio or #UGATrio.

Check out all the schools in our eight-team bracket

Which school has the best trio of current NFL/MLB/NBA stars?

Carr was a three-year starter and back-to-back Mountain West Conference Offensive Player of the Year under center for the Bulldogs. In his senior season, he became only the fourth FBS quarterback to register 5,000 passing yards and 50 touchdowns in a single season. Carr was drafted with the first pick of the second round in the 2014 NFL Draft by the Oakland Raiders, with whom he’s developed into one of the league’s premier passers. Carr is a two-time Pro Bowler and currently ranks ninth in the NFL with 11 touchdown passes this year.

Before Judge became the face of baseball’s most historic franchise, the 6-7, 230-pound right fielder was a solid for two Fresno State NCAA tournament teams. Judge finished with a .345 batting average and .988 OPS with 18 home runs in his three years as a Bulldog. His power first blossomed his sophomore year when he won the College Home Run Derby. In his first full season with the Yankees in 2017, the MVP and Rookie of the Year candidate crushed 52 home runs, including one 495-foot moonshot.

George was an electric two-time Second-Team All-WAC selection who soared for dazzling dunks and showed defensive tenacity at Fresno State. The forward averaged more than 15 points, six rebounds and two steals per game over two seasons. In 2010, George was selected 10th overall by the Indiana Pacers, where he became a four-time NBA All Star, 2014 All-Defensive second teamer and a 2016 Team USA Olympic gold medalist. This season marks his first with the Thunder.

Stafford started all 39 games he played at Georgia, finishing with a 30-9 record and undefeated in bowl games, including a 41-10 win over Hawaii in the 2007 Sugar Bowl. He finished his UGA career with 7,731 passing yards and 51 touchdowns to 33 interceptions, with a quarterback rating of 133.3. After his junior season, in which he threw for 3,450 yards, 25 touchdowns and 10 interceptions, Stafford became the fourth player in Bulldogs history selected with the first overall pick in the NFL draft, the first since 1953. He has started every game for the Lions dating back to the 2011 season, and has thrown for 31,731 yards and 199 touchdowns in nine NFL seasons. In 2011, Stafford led Detroit to its first playoff appearance since the 1999 season, and the Lions have returned to the postseason in two of the past three seasons.

Wood spent three years at Georgia, where he was one of the Bulldogs’ primary starters during in his sophomore and junior seasons. In 2012, Wood went 7-3 in a difficult SEC with a 2.73 ERA in 15 starts (102.1 innings pitch) where he managed 100 strikeouts to just 21 walks. After back-to-back 15-start, 100-inning seasons, he was selected in the second round (85th overall) by the Atlanta Braves. Wood spent the first three seasons of his career with the Braves as a starter and reliever before being dealt to the Los Angeles Dodgers in a three-team trade in 2015. Wood has emerged as one of the league’s better pitchers this year, finishing 16-3 with a 2.72 ERA and an opponents batting average of .217.  Wood has been one of the Dodgers’ starting pitchers during their current postseason run as they gear up to face the Houston Astros in the World Series.

Caldwell-Pope played at Georgia for two seasons and made an impact the second he stepped foot on campus in Athens. Caldwell-Pope averaged 13.2 points and 5.2 rebounds per game as a freshman, and and was named the 2012-13 SEC Player of the Year the next season with 18.5 points and 7.1 rebounds per game. The 6-foot-5 guard spent the first years of his NBA career with the Detroit Pistons, who drafted him No. 8 overall, where he averaged 11.7 points, 3 rebounds and 1.6 assists as a frequent starter before signing with the Lakers this past offseason.