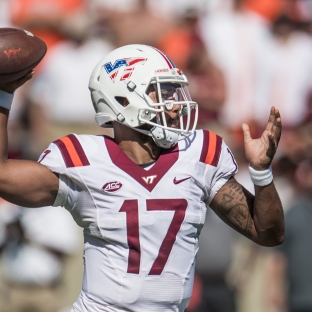 Virginia Tech football: Hokies eager for another crack at No. 2 Clemson in ACC showdown

Virginia Tech players say they are taking a sensible approach to their highly-anticipated Atlantic Coast Conference opener on Saturday night. They say they are casting aside any thoughts of revenge.

The No. 12 Hokies (4-0) play host to second-ranked and defending national champion Clemson on Saturday night.

The Tigers (4-0, 2-0 ACC) have hardly slowed down this season as they seek to repeat. They will arrive in Blacksburg, Virginia, having won their last 11 road games and nine of their last 10 matchups against teams ranked in the top 15.

The Hokies, unbeaten after nonconference play for the first time since 2011, toppled No. 23 West Virginia 31-24 to open the season but haven’t been tested since, outscoring their last three opponents 129-17.

Although the Hokies are stepping up in compeition, they insist they aren’t putting any added meaning on the outcome. Even being reminded of their close 42-35 loss to the Tigers in last year’s ACC Championship doesn’t knock them off that narrative.

“We’re thinking of it as just another game,” redshirt freshman quarterback Josh Jackson said Tuesday. “It has everything behind it and all that, but it’s just one conference game and that’s all it really stands for.”

The Hokies acknowledge that the loss last December hurt more than most — they drove to the Tigers’ 23 late in the game, but quarterback Jerod Evans was intercepted on a fourth-down play — but they also say there’s no sense looking back.

Coach Justin Fuente said he didn’t even bring last year’s game up when talking with the team.

“It’s two different teams on both sides of the ball for us and for them, so a lot of talent they have on the offensive side still with guys that came back and new guys that stepped in on their role,” Hokies linebacker Tremaine Edmunds said. “We just have to go do our job of preparing and go play a sound fundamental game.”

Fuente made it sound like the Hokies almost need to play a perfect game.

These are the games where legends are born…

“You make a mistake, they’re going to make you pay,” he said. “… Really, you don’t even have to make a mistake. You can take one step in the wrong direction or hesitate for half a step when you’re playing the type of talent that we’re going to go up to. It’s like defusing a bomb — one small snip of the wire that’s incorrect and boom, blow your hands off, and that’s just how talented and how good they are.”

The Tigers have a distinct advantage when it comes to big-game experience, having played for the national championship in each of the last two seasons. Clemson running back Adam Choice isn’t sure that matters.

RELATED: How the Power 5 conferences stack up, stat by stat

“I won’t say it’s necessarily easier, because every team presents challenges,” he said. “That’s why we prepare each week like it’s a top 15 matchup. Any team can beat you on any given day. And that’s how teams do get beat, they take a team lightly. We try not to take any opponent lightly or think, ‘Oh, this is going to be easy.’

“We always have to prepare as hard as if we’re playing Alabama or Virginia Tech or Louisville.”

The Tigers have won the last four meetings, and the Hokies are eager for another shot at them.

“A lot of people don’t get these chances, and I will say we worked to get here, not just (that) it was handed to us,” Hokies leading wide receiver Cam Phillips said. “Some people didn’t think we would go 4-0, whatever that may be, but we’re here now, and we get a big game into our house this weekend.”

This article was written by HANK KURZ Jr. from The Associated Press and was legally licensed through the NewsCred publisher network. Please direct all licensing questions to legal@newscred.com.