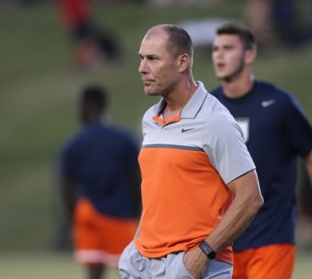 Gelnovatch surpassed his predecessor, Bruce Arena, with his 296th career victory. Gelnovatch is in his 22nd season as head coach at Virginia and his 29th season as a member of the Cavaliers’ coaching staff. He has amassed an overall record of 296-121-49 and has won two national championships (2009, 2014) during his time in Charlottesville.

“You take wins as you can get them but I think this is a good one because that is a very good team [Villanova],” said Gelnovatch. “I think any time you win in an opener it gives you confidence but I have to give Villanova a lot of credit because they certainly have talent be a playoff team and to do very well this season.”

CONGRATS to Head Coach George Gelnovatch! Tonight was his 296th career victory, surpassing Bruce Arena for the most in UVA history! pic.twitter.com/YhuwEKF2kO

Senior Sergi Nus scored the game-winner on a penalty kick in the 105th minute. Virginia (1-0) broke a 1-1 tie in the 53rd minute on Faris Abdi’s first collegiate goal. The Wildcats responded a little over 16 minutes later with the equalizer by Luca Mellor.

Neither team would score again until the second overtime session, when Simeon Okoro drew a penalty in the box while driving to the far side post. Nus converted his third penalty kick of his career to clinch the season-opening victory for the Cavaliers.

Virginia will continue its five-game home stand Thursday when it hosts Hofstra at Klöckner Stadium. Game time is scheduled for 6 p.m. and will be the first game of a men’s and women’s soccer doubleheader.

This article is from The Free Lance-Star, Fredericksburg, Va. and was legally licensed via the Tribune Content Agency through the NewsCred publisher network. Please direct all licensing questions to legal@newscred.com.