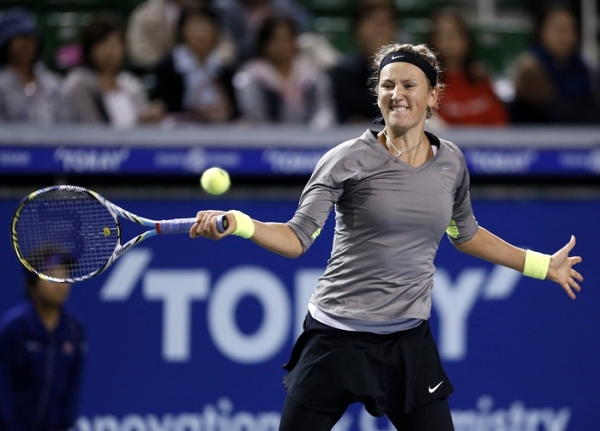 Victoria Azarenka of Belarus returns a shot against Roberta Vinci of Italy during their third round women’s singles match at the Pan Pacific Open tennis tournament in Tokyo September 26. (Photo : Reuters)

The U.S. Open is winding down and the cream of the crop is rising. World women’s No. 2 Victoria Azarenka is set to take on Flavia Pennetta today for the opportunity to advance to the finals. Live stream the action by clicking this link.

Azarenka is the youngest member of the final four in the U.S. Open women’s draw, a surprising fact considering tennis’ reputation as a game for young legs. “I’m a baby, what can I say?” the 24-year-old Azarenka said. She cited the quality of medicine and training regimens available to this generation of players for stars extending their careers into their 30s.

“I think it’s just showing that our sport is taking physical ability to another level,” Azarenka said. “You see everybody taking care of their bodies much more, really paying attention to nutrition, fitness, everything. Everybody is working out.”

Although she still must take care of Pennetta in the semifinals today, many are salivating over a potential Azarenka-Serena Williams matchup in the final. Azarenka is one of just three women who have been able to topple the dominant Serena in 2013.

Azarenka was careful to note that she isn’t looking past Pennetta, replying with a terse “No,” when asked if she thinks about a finals matchup with the world’s No. 1.  When asked if she watches Serena’s matches Azarenka replied, “Sometimes I watch but I don’t really watch a lot of TV. Plus, she played too quick, all the matches.”

Her opponent today, Pennetta, is ranked 83rd among women in the field. Despite her low ranking, Azarenka said she isn’t taking her lightly. “She’s very good player, all-around player,” Azarenka said of Pennetta. “She can do anything. She has a great touch, great variety, she can create power, create spin. I’m really looking forward to that match. It’s a big challenge.”