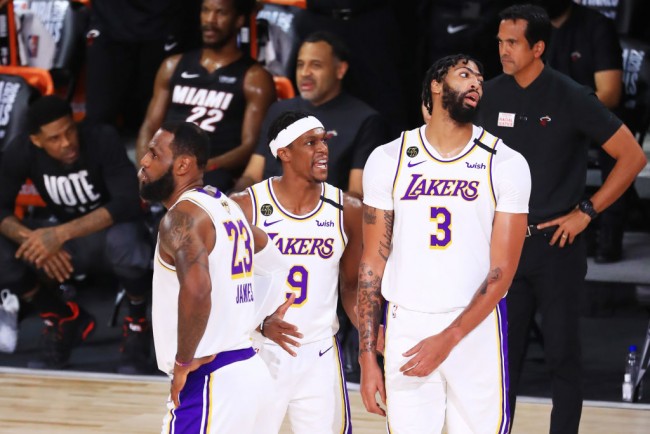 Veteran Lakers Keep Getting Older With the Return of Rajon Rondo; How Will He Help Lebron?

LAKE BUENA VISTA, FLORIDA – Rajon Rondo (#9), Anthony Davis (#3), and LeBron James (#23), all of the Los Angeles Lakers, react during the second quarter against the Miami Heat in Game 6 of the 2020 NBA Finals at AdventHealth Arena at the ESPN Wide World Of Sports Complex on October 11, 2020 in Lake Buena Vista, Florida. (Photo : Mike Ehrmann/Getty Images)

Rajon Rondo is going back to Hollywood. After agreeing to a contract buyout with the Memphis Grizzlies on Saturday, the veteran point guard has decided to reunite with LeBron James and the rest of his former Lakers teammates in Los Angeles and sign a one-year, $2.6 million deal with the 17-time NBA champions.

Sources have told ESPN‘s Adrian Wojnarowski that Rondo is expected to sign the contract on Tuesday. He will still make the entire $7.5 million salary he was supposed to earn this season by combining the cash he got from the Grizzlies buyout and the money he will get in his new Lakers contract.

That is a huge win for Rondo, who was traded to the Grizzlies earlier this month by the LA Clippers as part of the Eric Bledsoe deal. Rondo played for the Lakers before, with the four-time All-Star donning the purple and gold for two seasons from 2018 to 2020. Rondo played a crucial role in the Lakers’ championship run in the Orlando bubble last year, and Los Angeles decided to run it back with the two-time NBA champion.

The Lakers are putting a premium on experience this coming season, with the team signing up a bunch of their former players. Apart from Rondo, the Lakers have again signed Dwight Howard, Trevor Ariza, Kent Bazemore, and Wayne Ellington this past offseason.

The Lakers also have stacked up their roster with plenty of veterans, with Rondo the latest aging All-Star to join their squad. Rondo, LeBron James, Russell Westbrook, Howard, Carmelo Anthony, and Marc Gasol were all named All-Stars back in 2012, and here they are nine years later, looking to win a championship together.

Rondo will provide much-needed depth for the Lakers at the point guard position, with James and Westbrook expected to share ball-handling duties in the starting lineup. The 16-year veteran still has something left in the tank, shooting a career-best 40.4 percent from beyond the arc last season.

After winning the championship with the Lakers in 2020, Rondo cashed in a lucrative two-year, $15 million deal with the Atlanta Hawks. The move didn’t pan out, though, as the Hawks decided to trade him to the Clippers, where Rondo was a non-factor during their deep playoff run.

Rondo, who averaged 5.4 points and 4.4 assists in 45 games played with the Hawks and Clippers last season, will be looking for one last shot at glory with the Lakers before he retires. Rondo has averaged 10.0 points, 8.1 assists, and 4.6 rebounds over his illustrious NBA career, including stops with the Sacramento Kings, Chicago Bulls, New Orleans Pelicans, Boston Celtics, and Dallas Mavericks.