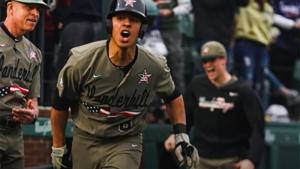 Vanderbilt vs. UCLA and 9 more DI college baseball series you won't want to miss this weekend


What a week it’s already been for college baseball. Tuesday saw seven top-25 teams fall in midweek action, including then-undefeated UCLA. It all setting up another exciting slate of weekend series we can’t wait to see.

RANKINGS: Top 5 stays the same as Florida holds at No. 1 in D1Baseball.com top 25

As we do every week, let’s break down the 10 series we’ll be sure not to miss this coming weekend in DI college baseball.

No. 2 Vanderbilt at No. 6 UCLA kicks off the Southern California Baseball Classic
There’s plenty of action at Jackie Robinson Stadium this weekend at the Southern California Baseball Classic, but the Friday night showdown between these two top-10 heavyweights is the main event. There’s a lot of good news for Vanderbilt heading into this series. Mason Hickman, Kumar Rocker and Jack Leiter have been lights out on the bump and Austin Martin is filling the bill as the offensive leader. Opposite the Commodores, UCLA was absolutely rolling until a Tuesday shocker, losing to UC Santa Barbara. The Bruins were a perfect 11-0 and three of their starting pitchers have sub-1.00 ERAs while Matt McLain has gotten off to the hot start UCLA needed him to.

Neither team can rest very long after Friday as both have Southern California and No. 22 TCU — another one of those top 25 teams that were upset on Tuesday now looking to make a statement in a bounce-back win — on the bill this weekend as well. Here’s the complete schedule for the Classic.

No. 3 Louisville at Wake Forest | March 6, 7 and 8
There was a lot of preseason hype around the Demon Deacons heading into 2020, and rightfully so. This lineup has some exciting bats. Chris Lanzilli — who we pegged as an under-the-radar preseason player of the year candidate — is off to a nice start, on fire of late with four multi-hit games in a row heading into Friday’s action. An early-season sweep at Long Beach State bumped them from the rankings, but they look back on track, which is good because Louisville is on fire, winners of eight in a row. Reid Detmers is always a main attraction as the Friday night ace has been solid through three starts, now 2-0 with a 1.69 ERA, 1.00 WHIP and 33 strikeouts to just four walks.

Rice at No. 5 Texas Tech | March 6-8
Sure, Rice isn’t off to the best of starts, but Trei Cruz looks to be heating up with three multi-hit games in his last four gos. But this Texas showdown is all about the Red Raiders whose bats are must-watch baseball until further notice. The team is hitting .339 — fourth-best in DI — and they have already belted 22 home runs and scored 139 runs through 14 games. Both Brian Klein and Dylan Neuse are hitting over .400 while freshmen Nate Rombach and Jace Jung are showing some serious pop. The pitching has been on fire as well, but they can afford an off-day here and there with the run support they receive.

No. 8 NC State at Virginia | March 6, 7 and 8
Virginia is off to a very nice 10-3 start and 9-1 at home which makes this a tricky venture for the undefeated Wolfpack. Griff McGarry and Mike Vasil are delivering atop the rotation for the Cavaliers while Chris Newell is hot with the bat, hitting .410 with seven extra-base hits. But how about NC State? The Wolfpack just poured 24 runs on Coastal Carolina — a team we had in the Super Regionals this preseason — and look like an unstoppable force right now. The team is hitting .348 with 22 home runs and 125 runs scored as one of four remaining undefeated teams in DI college baseball. Don’t sleep on this pitching staff either, which boasts two starting pitchers with ERAs under 1.00.

No. 11 Florida State at No. 12 Duke | March 6, 7 and 8
The Mike Martin, Jr. era is off to a 9-3 start and this will be the Seminoles second big weekend test in a row. Last week they struggled with Texas Tech — who hasn’t? — dropping both games, and now hit the road for a top-15 showdown with some nice ACC implications. Right now, the bats haven’t come alive for Florida State, but the pitching looks sharp with CJ Van Eyk (1.23 ERA, 1.27 WHIP and 19 strikeouts) leading the way. The Blue Devils are off to a 10-2 start, but this is their first true test of the young season. The top of their rotation has looked sharp as well, as Cooper Stinson has yet to allow an earned run and Bryce Jarvis has a 15-strikeout perfect game on his resume this season.

No. 16 Michigan at No. 24 Pepperdine | March 6-8
Despite a midweek 6-5 loss to Florida Gulf Coast, Pepperdine is off to a hot start, now 10-2 and in the national rankings for the first time since 2014. The Waves were impressive in a sweep on the East Coast over Florida International and now return home to host the reigning runners-up. All three starting pitchers have been solid with Chandler Cooper leading the way, while Billy Cook and Justin Lutes deserve your attention at the plate. Coming to town is a Michigan team that has already faced ups and downs with big wins against Vandy and Arizona State and a series loss to UConn. If Michigan can survive this test, the Wolverines finally open their home season after a grueling four weeks on the road next weekend where they can start to get comfortable.

Xavier at No. 17 Long Beach State | March 6-8
Xavier is not off to a great start, but Long Beach State is. College baseball just feels right when the Dirtbags are making noise, doesn’t it? Long Beach State looks like a contender once again under first-year head coach Eric Valenzuela and already has big series wins against Wake Forest and Mississippi State. LBSU can’t sleep on this 4-7 Xavier team, however, as a weekend tilt with smoking-hot No. 23 Tulane awaits in New Orleans next weekend. You certainly can’t deny the Dirtbags have tested themselves before conference play opens.

Wright State at No. 20 Tennessee | March 6, 7 and 8
There are two ways to look at Wright State’s 3-8 start. The Raiders — a 42-win team a year ago — played a loaded non-conference schedule to test themselves right out of the gates. They’ve played Mississippi State, Louisville, and Auburn with Tennessee on deck. They haven’t fared well, but that’s no reason the 13-0 Volunteers should take them lightly. The Vols offense is just clicking, hitting .325 with 24 home runs and 153 runs scored. It’s hard to pick out the best bat right now, but our eyes are on Zach Daniels and his .381 average and 1.376 OPS. On the bump, Tennessee has a combined 1.46 ERA, so again it’s hard to find the hot hand when they are all dealing. This team looks like a real SEC threat and needs to be on the radar.

New Mexico State at Texas A&M | March 6, 7 and 8
Texas A&M did not have the results it hoped for losing all three at the Frisco Classic last weekend. But we’re here for the Asa Lacy vs. Nick Gonzales showdown on Friday night. You know, Nick Gonzales and his .500/.652/.1.354 slash line with 12 home runs and 36 RBI already? Lacy was clocked at 98 miles per hour this past weekend and is striking out 17.5 batters-per-nine. This is a showdown between two elite college baseball stars, and two teams that can make a case for the top 25 with a series win.

Lipscomb at Alabama | March 6, 7 and 8
Lipscomb is an impressive 8-3 so far, with big series wins at the Turface Classic and against Ohio State, but Alabama is the story here. Now the Crimson Tide haven’t challenged themselves too much just yet, but 13-0 is 13-0. Tyler Gentry (.467, four doubles, four home runs and a 1.376 OPS) and Sam Praytor (.419, five home runs, 1.310 OPS) are in the proverbial zone while Connor Prielipp has yet to allow a run through three starts. Alabama goes perfect here, they’ll enter SEC play next weekend in a winnable series against Mizzou with a ton of momentum.