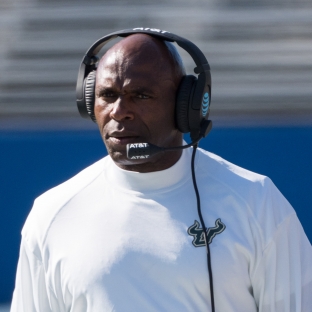 TAMPA, Fla. — When No. 19 South Florida assembled for its first practice following a season-opening rout of San Jose State, coach Charlie Strong didn’t have any difficulty keeping the attention of his players.

The Bulls (1-0) were anything but flawless in their debut under Strong and are determined to be a lot sharper in Saturday’s home opener against Stony Brook (0-0).

“You always look for a big improvement from Game 1 to Game 2, which we should have,” Strong said.

College football Week 1 score predictions: What to watch this weekend

Quinton Flowers led the way, throwing for two TDs and running for a third. The Bulls ran a school-record 101 plays, including 74 rushes for 315 yards, on the way to scoring at least 30 points for a nation-leading 18th consecutive game.

“We just started playing our game,” receiver Marquez Valdes-Scantling said. “We got out and tried to press a little bit too much.

This Saturday, football is back in Ray Jay! Who will be joining us? pic.twitter.com/rqxgp0OwpP

The senior had six receptions for 91 yards in the opener said, they “just relaxed, went out and played our game, and things started to work our way.”

Some things to know about USF and Stony Brook:

Teammates say Flowers, one of the nation’s top dual-threat quarterbacks, is an improved passer from a year ago when he actually was pretty good — throwing for more 2,800 yards and 24 TDs vs. eight interceptions — while rushing for more yards than any other QB in the country except Heisman Trophy winner Lamar Jackson.

“He’s actually gotten better over the years of placing the ball where it needs to go. … He’s a great kid, he’s a great athlete, he’s a great quarterback. That’s what we count on him to do,” Valdes-Scantling said.

Stony Brook, coming off a 5-6 finish, is facing a FBS opponent for only the ninth time. The Seawolves, beginning their 12th season under coach Chuck Priore, dropped their only other meeting with USF 59-14 in the 2010 opener.

California was fun for Week, but we can’t wait to see you in Ray Jay Saturday!https://t.co/7HgEnEL18v#BullStrong pic.twitter.com/I4p9okKd57

USF’s defense yielded a field goal and two touchdown passes in the opening quarter of last week’s 42-22 victory over San Jose State, yet the scoring drives only covered 6, 6 and 47 yards. The unit forced three turnovers, leading to 14 points, and the Bulls forced 11 punts and stopped San Jose State on downs once.

Stony Brooks returns QB Joe Carbone, who completed 52 percent of his passes for 1,017 yards and three TDs against 12 interceptions in 2016, as well as the Seawolves’ leading rusher (Stacey Bedell, 698 yards, 10 TDs) and receiver (Ray Bolden, 37 receptions, 536 yards, one TD). “They’re very multiple on offense, but what’s key for us is how we play,” Strong said of the challenge USF faces defensively. “We have to have focus, and we have to go into the game, where it’s all about us getting better.”

USF has won six straight games dating to last season, when the Bulls finished a school-best 11-2 and beat South Carolina in the Birmingham Bowl. The longest winning streak in the program’s history is eight, set over the 2006 and 2007 seasons.

This article was written by Fred Goodall from The Associated Press and was legally licensed through the NewsCred publisher network. Please direct all licensing questions to legal@newscred.com.