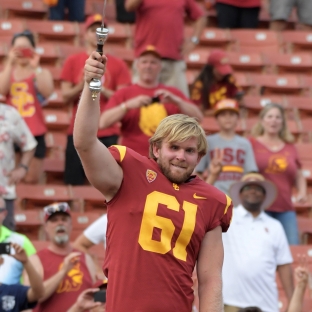 USC long snapper Jake Olson made headlines on Saturday when he took the field for the first time in the Trojans’ season opener against Western Michigan.

After a late touchdown in the fourth quarter, Olson, who is blind, perfected the first snap of his career, setting up kicker Chase McGrath’s extra point in the Trojan’s 49-31 victory.

This is anything but a regular PAT.

Jake Olson, blind since age 12, just snapped for the first time in a live game. https://t.co/amyHcFoVue

“What a pressure player,” head coach Clay Helton said after the game. “Was that not a perfect snap?”

Olson, who was born with retinoblastoma, lost his left eye when he was 10 months old. After numerous medical procedures in his other eye, Olson had his right eye removed at the age of 12 in 2009. The day before his surgery back in 2009, he spent the day at USC’s football practice, and has been a part of the program ever since. Current Seattle Seahawks coach Pete Carroll was first to introduce Olson to the team, and after Olson’s performance on Saturday Caroll said the moment brought him to tears.

On Tuesday, the redshirt sophomore was honored with Pac-12 Special Teams Player of the Week honors.

Olson served as long snapper for his high school football team from 2013-14 and received a scholarship to attend USC in 2015 and walked on to the football team.

After Saturday’s win, Olson took to Twitter to thank Trojan fans for their support.

Thanks for all the love and support Trojan Nation! See below for a longer statement. Beat The Farm! pic.twitter.com/RXZKBz1r5U