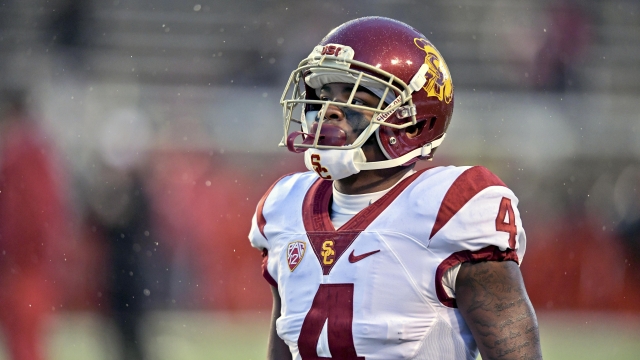 LOS ANGELES — Chris Hawkins looked at the palms of his hands and started counting with his fingers.

A reporter had asked Hawkins, a fifth-year senior safety, to identify how many position battles there were on USC’s defense this training camp.

A glance at the Trojans’ roster reveals most of their starters on defense returned from last season. In fact, seven of the 11 starters are back with the program, leaving little of the depth chart for coordinator Clancy Pendergast to reshuffle.

It leaves USC with an interesting, albeit welcomed, dynamic this August.

How does a defense push through camp when its rotation remains largely settled?

For Hawkins, he remained aware of the safeties resting behind him on the depth chart. He rattled off five others who are vying for his starting spot.

“We never get complacent,” Hawkins said. “When you got the best guys behind you who can go start at another college, you always feel like you have to be your best. So, I mean, we come out here every day, put our heads down and work.”

Junior linebacker Cameron Smith maintained the group is stocked with veterans. Nine of the 11 projected starters on defense are upperclassmen. They know how to prepare for a season, he said Wednesday, the halfway point of camp.

A refresher: The Trojans will have at least four new starters on defense in 2017. Hawkins, who rotated in frequently last season, takes over for Leon McQuay III at safety. Sophomore Jack Jones replaces Adoree’ Jackson at cornerback. Junior John Houston comes in at inside linebacker for Michael Hutchings. The sole question remains at nose tackle, where someone must take over for Stevie Tu’ikolovatu. The two primary candidates are freshman Marlon Tuipulotu, who enrolled early for spring practice, and senior Josh Fatu. They have shared most of the repetitions with the first-team defense through nine practices.

RELATED: 8 non-conference college football matchups to look out for in 2017

With the top of the depth chart seemingly settled, it presents other challenges.

After reviewing film of USC’s scrimmage on Saturday, Coach Clay Helton praised outside linebacker Connor Murphy for his strong effort. But the sophomore is behind Porter Gustin and Uchenna Nwosu, two All-America candidates.

Murphy acknowledged the steep odds of unseating either Gustin or Nwosu as a starter, but is trying to develop a niche for himself. Perhaps he’ll come in on third downs, in passing situations and line up on the edge?

“I’m just trying to carve out another role for myself and try to get as much playing time as possible,” Murphy said.

Others, such as safety Ykili Ross, who has intercepted three passes in the past week, face a similar uphill climb.

Helton recounted one valuable example for his younger players.

In the Trojans’ comeback victory over Penn State in the Rose Bowl, Burnett caught three touchdown passes, including the tying score. ___