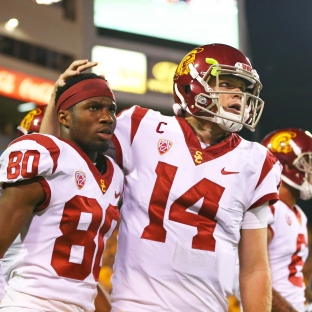 As Pittman has carved out a larger role on offense for the No. 11 Trojans this season, he quickly realized that playing with Darnold requires a receiver to be ready at all times.

“I learned that he can make every throw on the field and don’t ever take a play off cause that play you take off he’s throwing it deep to you,” Pittman said.

RELATED: How each of the top 11 teams can make the College Football Playoff

With the emergence of Pittman and redshirt freshman Tyler Vaughns, Darnold finally has the USC passing game rolling heading into Saturday’s rivalry game against UCLA.

Darnold has thrown for 906 yards and seven touchdowns against one interception during a three-game winning streak that locked up the Pac-12 South title. In a 38-24 win at Colorado that secured a berth in the conference title game for the second time in three seasons, Darnold was 21 of 34 passing for 329 yards and two touchdowns without a pick.

The growth of Darnold’s receivers was evident on his first touchdown pass. It was nothing fancy, just a jump ball in the end zone for the sophomore Pittman.

“Just when I see the ball up in the air I just got to go get it,” Pittman said of the 10-yard grab for his first career receiving touchdown.

But it was the kind of play USC receivers were not making early in the season as they tried to replace budding NFL star JuJu Smith-Schuster.

Darnold was more than willing to put the ball up for Smith-Schuster and Darreus Rogers last season and trust they would make contested catches. But Darnold started this season throwing to smaller receivers not capable of consistently winning those 50-50 balls, playing a part in him throwing nine interceptions in the first six games.

“We just weren’t competing for those plays and making those plays,” offensive coordinator Tee Martin said.

It wasn’t until the 6-foot-2 Vaughns and 6-foot-4 Pittman carved out regular roles that Darnold’s aggressiveness began paying off again.

Vaughns has been Darnold’s top target in catches and yards receiving since breaking out in the loss at No. 15 Washington State. Over the last three games, Vauhgns has 15 receptions for 275 yards and three touchdowns.

Pittman wasn’t much of a factor until the last two games, but has seven receptions for 118 yards and one touchdown in that span.

“I’ve just been asked to do more,” Pittman said. “Really, I think that’s it.”

Pittman and Vaughns have had more chances to make those tough catches outside the numbers as running back Ronald Jones II has heated up.

“The work is not done. Victory Bell and then San Fran!” #FightOn pic.twitter.com/pgLkMYJAXh

“That’s what makes us different. When teams have to load the box to stop our run game and decide to play press man-to-man you have to make those plays down the field. And it’s a long day when you don’t make those plays, so hopefully we continue to do that,” Martin said.

Add in steady Deontay Burnett working out of the slot and Martin sees an emerging receiving corps that can be as good as any he has seen in his six seasons coaching wideouts at USC.

“It’s a big statement to make, but I’m that confident in the lot of them,” Martin said.

This article was written by Dan Greenspan from The Associated Press and was legally licensed through the NewsCred publisher network. Please direct all licensing questions to legal@newscred.com.