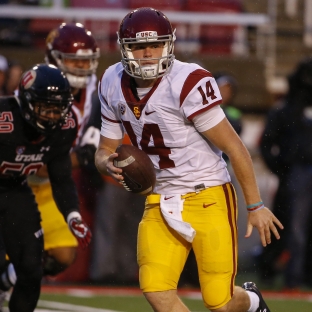 LOS ANGELES — Ask any Southern California player about last season’s 31-27 loss at Utah, it is now remembered with a degree of fondness that seems counterintuitive given the dramatic defeat.

But in giving up a touchdown in the final seconds, an outcome that cost the Trojans a berth in the Pac-12 title game, the Trojans found their footing for a season that would end with a win in the Rose Bowl as time expired.

As No. 13 USC (5-1, 3-1) readies to host the Utes this Saturday, it hopes for a different result on the field but the same springboard effect for the rest of its season.

“That Utah game was, for sure, like the turning point of our season,” tight end Daniel Imatorbhebhe said.

“That only made us stronger,” center Nico Falah said. “It was a big down point for us, but the climb up started there.”

Coach Clay Helton took confidence coming out of that game from the play of quarterback Sam Darnold, who threw for 253 yards and rushed for 41 yards and a touchdown in his first career start.

“You just kind of knew this was the last piece of the puzzle that’s going to put us over the top to be a successful football team,” Helton said.

The end result wasn’t obvious at the time. After the loss, USC was 1-3 for the first time since Pete Carroll’s first season in 2001. There were serious doubts about whether Helton, who had been promoted after a solid stint as interim coach following the firing of Steve Sarkisian the previous season, was qualified to hold the position.

USC was galvanized by how Darnold had played in defeat. The team had found its emotional center, someone capable of getting the struggling offense on track.

On Saturday, the second half of the season begins.

“I remember his rushing touchdown on, like, the QB draw or whatever, and we were like, ‘OK, this dude is real.’ The rest is history,” running back Ronald Jones II said. “We were behind him. We knew what was coming.”

Imatorbhebhe was more impressed with how Darnold reacted in the locker room afterward than by his play on the field.

“I just remember looking at him and I saw that he was just, like, solid,” Imatorbhebhe said. “He was just like, ‘Guys, we’re going to be fine.’ This dude is my age, he’s talking like that. I’m young, too. If he’s confident, he made it easy for the rest of us to be confident, and great things happened as a result of that.”

MORE: Behind the numbers of the AP Top 25 for Week 7

Just a few days before that game, USC held a players-only meeting following a dismal loss at Stanford. Tight end Tyler Petite remembers it being framed as a chance to reshape the legacy of that team, for good or bad.

“We really had an honest question like, what do we want to be?” Petite said. “Do we want to be this team that just keeps losing, like an SC team that will go down in the history books as just not being very good? Or do we want to make something of our season?”

There were similar conversations in the locker room after USC’s 30-27 loss at Washington State this season, and Petite expects the same effect when facing its five Pac-12 South foes over the next six weeks. Win those games and USC will play for the conference title, the very outcome denied by Utah last season.

USC’s young players stepped up to help beat the Beavers today. Hear what @tswag03, @FinkMattfink and more had to say after the win! #FightOn pic.twitter.com/YANRLlpToN

USC might be thankful for what happened after Utah last season, but hopes to show its gratitude by sending its guests home with a loss.

“That was a tough game, but we’re a different team,” Jones said. “We’re ready to get that taste out of our mouth.”

This article was written by Dan Greenspan from The Associated Press and was legally licensed through the NewsCred publisher network. Please direct all licensing questions to legal@newscred.com.