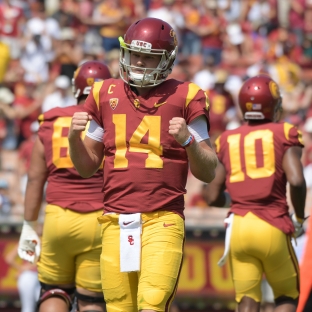 LOS ANGELES — In Sam Darnold’s mind, his first season-opening start as Southern California’s quarterback had been pretty much a disaster.

From his two interceptions to the absence of a touchdown pass, Darnold left the Coliseum last weekend with a sinking feeling, even after his sixth-ranked Trojans surged to a comfortable 49-31 victory over Western Michigan.

“I just felt weird, honestly, during the course of the game,” he said. “That’s probably the worst I’ve felt after a game in college.”

Darnold only cleared his mind after he studied what actually happened. Sure, he didn’t throw a touchdown pass for the first time since his first collegiate start, but he kept alive the Trojans’ 10-game winning streak with resilience and persistence.

“I felt worse than I actually played, honestly,” Darnold said. “It was good to look at the film. I actually came out of it really positive. I understood that I could get better, and I’m just going to keep moving forward from here, keep getting used to those throws that I’m going to have to make in a game.”

The laid-back Orange County product isn’t so mellow when it comes to self-assessment, and he has gone to work this week to prepare the Trojans (1-0) for their annual early-season showdown with No. 14 Stanford (1-0).

“The thing I love about Sam Darnold is he’s always so hard on himself,” coach Clay Helton said. “That’s what you appreciate as a coach. He’s always one that’s a perfectionist and wants to do better. I looked at a quarterback that did exactly what we asked him to do, and that was not get glued in on one guy, but spread the ball around and really trust the guys around you.”

Darnold went 23-of-33 for 289 yards and two interceptions against the defending MAC champion Broncos, who held a second-half lead before USC roared away with 28 fourth-quarter points.

Darnold had thrown at least two touchdown passes in every game of the Trojans’ winning streak, which culminated last season with his record-setting performance to win the Rose Bowl. But a closer look allowed Darnold to see the good side of his numbers from his first season opener as a starter.

Four of his 10 incompletions were receiver drops. Although his first interception was a risky throw into traffic, his risk was calculated — and both of his interceptions came on tipped balls.

“If that’s what he said, that’s how he feels,” Martin said. “I just felt like if we made a few plays on third downs early in the game, then you just feel totally different. I liked his second interception. He gave us a chance to make a play at receiver. If there’s going to be an interception Saturday doing the same thing, I’ll take it, because ultimately that’s going to help us get to where we want to be as an offense, and that’s being aggressive, pushing the ball down the field.”

All season long, the Trojans are racking up points to support vets thanks to CRC! #FightOn pic.twitter.com/ZzCtVv0P4y

Darnold realizes the Trojans’ tasks will get exponentially tougher against Stanford, the perennial Pac-12 power with an outstanding, experienced defensive secondary. Darnold was still Max Browne’s backup last season when the Cardinal beat USC 27-10, but he was promoted to the Trojans’ starting job the next week.

Darnold wasn’t the only USC offensive star with a funny feeling after Week 1. Deontay Burnett also felt the nerves of being an opening-day starter as the Trojans’ new No. 1 receiver, but the Rose Bowl hero shook off the jitters to catch seven passes for 142 yards.

“During the game, it was just shaky,” Burnett said. “Coming back and watching the tape, it wasn’t that bad, because we found ways we could get better throughout the season. But it was different, going from being a backup and just trying to prepare. We learned a lot, I think.”

This article was written by Greg Beacham from The Associated Press and was legally licensed through the NewsCred publisher network. Please direct all licensing questions to legal@newscred.com.