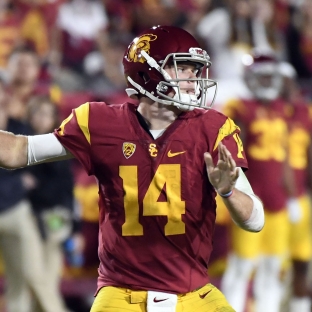 LOS ANGELES — Sky-high preseason expectations are an annual tradition at Southern California, right up there with the Salute to Troy kickoff event and the weekly lighting of the Coliseum torch before the fourth quarter.

Actually meeting those expectations has fallen out of favor since Pete Carroll left town eight seasons ago.

But after a nine-game unbeaten run culminated in a Rose Bowl victory last fall, coach Clay Helton and his calmer, gentler USC program finally appear ready to fulfill their bountiful promise for an entire season.

“When you come to USC, you welcome those expectations,” Helton said. “We’ve created a lot of momentum and a lot of confidence with what we did last season.”

Much of what the Trojans did last season was credited to quarterback Sam Darnold, who established himself as a star during that late-season run. Now a junior and a probable high pick in the next NFL draft, Darnold looks thoroughly comfortable with the pressure and expectations piled on his shoulders.

The young Trojans are growing up fast and making eye-popping plays on the practice field. #FightOn pic.twitter.com/lgOeh7Z095

And he’ll have plenty of help. The Trojans are the preseason favorite to win the Pac-12 because of their quarterback, but also because of the bountiful talent surrounding him.

USC football: Sam Darnold adjusting to life in the spotlight

Ronald Jones, Aca’Cedric Ware and touted freshman Stephen Carr are in the latest overflowing backfield group at Tailback U. Receiver Deontay Burnett could pick up the mantle from JuJu Smith-Schuster as Darnold’s top target, but he has competition.

“Probably the biggest (concern in training camp) is the chemistry between Sam and our new receivers,” Helton said. “I think they’re beyond talented, the kids that we redshirted, but they haven’t been in real live games yet.”

The defense that was quietly sensational throughout that regular-season run to the Rose Bowl has up to seven returning starters, including shutdown cornerback Iman Marshall and linebackers Porter Gustin and Uchenna Nwosu.

USC has to replace the starting center and both starting tackles from last season’s team, but Helton has options. Chuma Edoga appears to be settling in at right tackle, but Nico Falah has worked out at the position when he isn’t playing center with the first-team offense. Toa Lobendahn, who started at center in the 2016 season opener before tearing ligaments in his right knee and missing the season, has been working at center and at left tackle, where he started eight games as a freshman in 2014.

The Trojans rarely play an easy early schedule, and this season is tough. They open at home with Western Michigan, the MAC powerhouse that went 13-1 and played in the Cotton Bowl last season under departed coach P.J. Fleck. Perennial power Stanford arrives the following week for their annual early-season showdown, and Texas will visit the Coliseum on Sept. 16 for its first road game under new coach Tom Herman.

After that September gauntlet concludes with a dangerous trip to Washington State, the Trojans will settle in. The annual Notre Dame game is in South Bend this year, but the Trojans don’t have to play Pac-12 North favorite Washington or rebuilding Oregon in the regular season. A road game at chilly Colorado (Nov. 11) could be dangerous.

This article was written by Greg Beacham from The Associated Press and was legally licensed through the NewsCred publisher network. Please direct all licensing questions to legal@newscred.com.