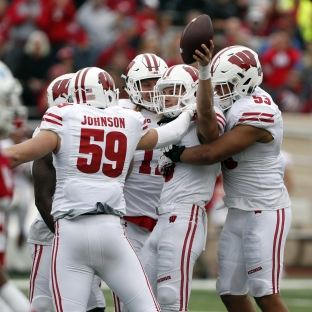 While there’s still ground to make up for Wisconsin football over the final four weeks of the season, the Badgers moved up one spot to No. 8 in the latest College Football Playoff rankings.

UW (9-0, 6-0), which won 45-17 at Indiana on Saturday, moved ahead of Penn State and Ohio State, who lost to Michigan State and Iowa last week, respectively.

Undefeated Miami, however, vaulted ahead of the Badgers after its impressive win over then-No. 13 Virginia Tech.

“Barry Alvarez, the athletic director at Wisconsin, was pretty vocal coming out saying that he just can’t imagine a team being able to get out of a Power Five (conference) undefeated and not making it as a champion into the playoffs,” ESPN analyst Kirk Herbstreit said on the network’s College Football Playoff rankings show Tuesday night.

“Looking at Wisconsin right now, they’re still in a position where they’re going to need help.”

While the losses by Ohio State and Penn State moved UW up the rankings, some believe slip-ups by those Big Ten teams could hurt the Badgers in the long run, since they could have had an opportunity to defeat a highly ranked Buckeyes or Nittany Lions in the Big Ten title game on Dec. 2.

The Badgers are one of just four undefeated teams remaining from Power Five conferences, but their weak strength of schedule — and inability to dominate that schedule — has led to a lower ranking from the CFP committee.

“Everyone in the room stays focused on our charge, and our charge is simple,” CFP selection committee chair Kirby Hocutt said on the show. “It’s to rank the top 25 teams and ultimately select the very best four teams for inclusion into the semifinals. That’s what we keep our focus on. Who are the very four best teams in the country this week?”

ESPN’s Paul Finebaum didn’t believe that statement provided much support for UW, and he called the Badgers the “most vulnerable of the unbeatens.”

Herbstreit also said remaining undefeated should not give UW automatic inclusion into the playoffs.

“If Wisconsin at the end of this is one of the top four teams and you feel, not because they’re the Big Ten champion, but you feel they’re one of the best teams, put them in there,” he said. “The coaches always say, ‘You have no idea how hard it is to go undefeated.’ Really? You know how hard it is to play seven ranked teams and only lose once or twice, especially if those losses are on the road?

RELATED: 8 remaining games that will impact the College Football Playoff

“I just don’t buy undefeated equals being one of the best teams. If they are based on watching them and evaluating them, then put them in, but don’t do it just because they’re unbeaten. That’s not a reason to do it.”

ESPN analyst Booger McFarland shared that sentiment, stating that if either Alabama or Georgia wins out, along with Notre Dame, Clemson and Oklahoma, there won’t be room for the Badgers regardless of how they finish the season.

McFarland also said 10th-ranked Auburn controls its fate more than UW does. The Tigers could have an opportunity to beat Georgia and Alabama a combined three times over the next four weeks, but they also lost to No. 24 LSU and fourth-ranked Clemson earlier this year.

The Badgers now have a win over a ranked team, however. Northwestern, which UW defeated 33-24 on Sept. 30, came in at No. 25, while the Badgers will host 20th-ranked Iowa on Saturday at Camp Randall Stadium.

UW needs to win four more games — vs. Iowa, vs. Michigan, at Minnesota and the Big Ten title game — in order to remain undefeated and give itself a chance at the top four when the final College Football Playoff rankings are released Dec. 3.

MORE: Breaking down the size of different teams, positions and conferences

“I think (UW) just came off their best game last week,” Herbsteit said. “This week they play Iowa, which just came off a big win against Ohio State, who’s been great all year. They’ve got games. Michigan, Iowa, Big Ten Championship game. They’re going to have an opportunity to, in my mind, impress people and be maybe considered a top-four team.

“But not just because they’re undefeated.”