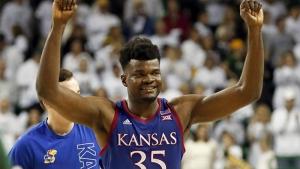 
The Kansas Jayhawks were on a roll when the 2020 NCAA men’s basketball tournament was cancelled. They were No. 1 in the final AP Poll, the Big 12 regular-season champion and one of the favorites to make the Final Four.

The Jayhawks were full of talent, but big man and Naismith Player of the Year finalist Udoka Azubuike was their senior leader and arguably their best player. Azubuike was a force inside as he averaged a double-double with 13.7 points and 10.5 rebounds — plus 2.6 blocks per game.

PODCASTS: Listen to every episode of March Madness 365

Azubuike joined Andy Katz on this week’s edition of March Madness 365 to break down Katz’s picks for five of Azubuike’s best games in his college career. Azubuike’s segment of the podcast begins at about the 30-second mark. Butler’s Kamar Baldwin is also a guest on this week’s episode.

The Kansas big man helped lead the Jayhawks to a 60-46 victory over the Horned Frogs — a win that gave head coach Bill Self his 700th career victory.

Azubuike told Katz that he remembers the team coming out a little sluggish, as TCU jumped out to a quick 6-2 lead. The Horned Frogs didn’t hold that lead for long though as Azubuike’s 20 points and 15 rebounds helped propel Kansas to the in-conference win.

Kansas was without suspended big men Silvio De Sousa and David McCormack against Tennessee in January — which left Azubuike by himself to shine.

“There was a lot of people that thought we were actually going to lose that game because of all of the distraction,” Azubuike told Katz.

Despite early foul trouble, Azubuike scored 18 points, gobbled up 11 rebounds, blocked four shots and shot 6-7 from the field to help Kansas to a 74-68 victory.

This early-season matchup turned out to be a preview of what could have been in the Final Four. Kansas survived the overtime championship game, 90-84, on the back of Azubuike’s 29 points and four blocks.

“That game is probably one of my best games of the year. A lot of people don’t know how good that team [Dayton] is,” Azubuike said on this week’s episode.

The Kansas center went up against arguably the best player in college basketball in Naismith Player of the Year Obi Toppin. Azubuike got the better of Toppin in that matchup as his 12-15 from the field helped him win the co-MVP award along with teammate Devon Dotson.

No. 3 Kansas traveled to Waco, Texas, in late February to take on the No. 1 team in the land — the Baylor Bears. Azubuike had one of the best games of his career.

The Jayhawks won, 64-61, in a barnburner behind Azubuike’s team-leading 23 points and 19 rebounds. This win helped Kansas solidify their 18th Big 12 regular-season crown.

Despite battling a sore ankle and nerves heading into his last game in Allen Fieldhouse, Azubuike played out of his mind on senior night. The 7′ 0″ NBA prospect notched 31 points, grabbed 14 boards and blocked five shots to help Kansas win its final home game of the season, 75-66.

“I just had everything in my head — what I’ve been through at my years at KU,” Azubuike said. “Just being able to play that game… it was an emotional game for me.”