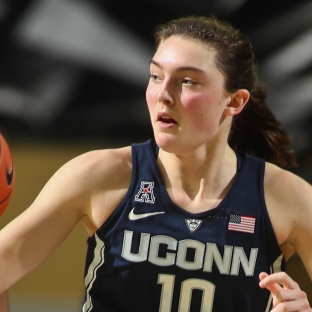 Bent and Irwin endured a typically challenging freshman season at UConn, playing sparingly as they navigated the game at a considerably higher level. While fellow freshman Crystal Dangerfield logged minutes off the bench — partly due to necessity, as the Huskies lacked experienced understudies — there were fewer opportunities for Bent and Irwin.

As they return for Year 2, the duo is part of a deep, talented roster. Four freshmen have arrived and two transfers are eligible, which will result in some competition for minutes.

Bent and Irwin, with a year in the rear view mirror, are different players.

“Both of them are more comfortable,” Auriemma said. “You see it.”

Irwin, a 6-foot-2 forward from State College, Pa., averaged 7.8 minutes in 31 games. She was a prolific scorer in high school (26.5 points per game as a senior), but the transition to UConn was arduous.

Hall of Famer @RebeccaLobo is on campus doing some interviews for @espn. First up is @KayNurse11 pic.twitter.com/FQqEEfIVBy

In the summer, she committed herself to improving her fitness after struggling with the pace of UConn practices.

“You’ve just got to be in the best shape you can be in,” Irwin said. “I feel like I’m in a lot better shape this year than I did at any point last year. In the offseason, I knew what to work on. It’s hard to work on new things whenever you’re in-season. I did not know what to expect [last season]Everything was new. This year I think I have a little bit more of an idea of what’s going to happen and what we’re looking for as a team.”

Auriemma’s first observation about Irwin this fall? “Kyla has changed her body,” Auriemma said. “She looks a lot more fit to be able to keep up. It’s allowed her to do more things on the floor. She understands that in order to have any chance to play and be contributing, she has to be able to do that.”

RELATED: The AAC is UConn’s world, and we’re all living in it

Bent, a 5-9 guard, came to UConn from Tabor Academy in Massachusetts. The Cape Cod product arrived with the reputation as an intelligent and diligent player, a sound all-around player. Auriemma described her as the type of player UConn has won with over the course of his three decades in Storrs — smart, selfless, with a high basketball IQ.

Those things remains true. But Bent admits she underestimated what he meant to play at UConn.

“Coming into it, you know it’s going to be hard,” Bent said. “You know you never have done anything like it. It’s just something … it’s really hard to explain. You can’t really put a finger on what it is. It’s just different. The standards that they hold for you … you can’t just rely on your work ethic. You have to rely on your quick thinking, your intelligence of the game, and kind of combine all those things together and do it 100 percent effort for three-plus hours every day.”

Yikes. We are scheduled to play seven of the other top-10 teams in the @usatodaysports preseason top 25. We’ll need your support this year! https://t.co/fsrGSScodV

And yet meeting those work standards was not an issue for Bent. Consider Auriemma’s description: “If you said, who’s the hardest working kid on your team? Her and Kia [Nurse]. It’s not even close.”

In fact, the challenge is harnessing Bent’s energy.

Bent played in 31 games as a freshman, averaging 9.3 minutes. She played 21 minutes against Tulsa when Dangerfield was injured in January, but her playing time decreased as the season progressed.

Her confidence wavered, which she has been addressing.

“That’s something I definitely want to fix,” Bent said. “I’ve talked to the coaches about it. It’s all on me to fix that. It’s just coming in here every day, stringing good plays back to back together and believing in myself and taking the stuff that I’ve worked on in the offseason and bringing it into practice.”

Irwin also said her confidence suffered as she tried to figure out what her role would be last season.

“It was tough,” Irwin said. “Try to find your role on the team. It was different than being a scorer, the blocker, the rebounder, everything that you were in high school. You just have to find that new role. It takes a whole season sometimes because you’re still stuck on being in that role. But I think by the end of last year I definitely found the type of player that I needed to be for this team. Each year, it will probably change, hopefully. But I’m ready for it.”

For Irwin, the adjustment meant increasing her pace. And that required her to address her conditioning.

“I have a lot better grasp on what I need to do and how to get there,” Irwin said. “Just playing harder. Last year I was always scared that I was going to be too tired to keep going. But this year it’s just kind of a mental state where you’ve just got to push through it. We all have our days, but I think just going hard overall, I’ve definitely done a lot better job at that this year. They’re always hard practices. You kind of know what to expect from the coaches.”

Bent admits the pace at UConn was startling, but she kept up. It’s a matter of controlling her game and playing smart.

RELATED: Will Notre Dame face any resistance in ACC this year?

Which is ironic, because Bent is nothing if not intelligent. She won Physics and Creative Writing Awards at Tabor, where she was a high honor student. She drew interest from Ivy League schools.

“She’s a really bright kid,” Auriemma said. “But then she’ll do something [on the court]and I’ll say, ‘What were you thinking?’ And she’ll say, ‘I wasn’t thinking.’ So we have to work on that.”

This year? Bent sees a difference. She has worked with assistant coach Shea Ralph on reading plays.

“Not to say that I’m not making mistakes, but you definitely feel more confident, you definitely feel more composed a little bit, just because not everything is new anymore,” Bent said. “So you can at least try to slow down and try to read the game as opposed to being worried about, Am I doing the right thing? Is this the right place to pass it? I can try to read more.”

Auriemma has said Dangerfield has made significant strides since last season and seems poised to be part of the team’s core, perhaps as a starter. The freshman will be competing for minutes, although Auriemma cautions that first-players can’t be expected to contribute consistently.

Where does that leave Bent and Irwin?

This article is written by Paul Doyle from The Hartford Courant and was legally licensed via the Tribune Content Agency through the NewsCred publisher network. Please direct all licensing questions to legal@newscred.com.