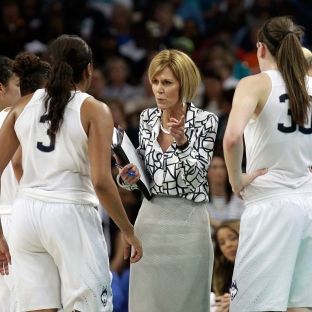 The team was on a European trip with a stop in Belgium, and in walked the 7-foot-2 Dydek. Dailey wasn’t impressed just with Dydek’s size, but also her bigger-than-life personality.

Now 23 years later, Dailey will be honored by the Connecticut Sun on Tuesday night with the Margo Dydek Award, given to an inspiring woman. Dydek played for the Sun from 2005-07 and died of a severe heart attack in 2011.

“What I’m most proud of is the award is about the person she was, not just on the basketball court,” Dailey said in a phone interview with The Associated Press. “Anytime you win an award, it’s overwhelming. Especially one of this nature. I think it’s flattering. I’m honored.”

Dailey will receive the award in front of the current UConn team as well as a few former players. Sue Bird and Breanna Stewart will be in town as the Sun host their Seattle Storm.

“It’s special because we’ll have four of our former players there to share it with them, they are a lot of the reason I’m being honored,” Dailey said.

Hear it from @UConnWBB‘s Chris Dailey herself! Come out tomorrow for our Women of Inspiration game.

Bird was thrilled that her team would be there for the celebration.

“What really has always separated CD is what she does not just on the court, but off the court as well,” Bird said. “How she helps the players. How she helped establish what the culture would be like at the University of Connecticut and that trickles into the community for sure. I’m sure what all of us learned as players as far as giving back and being present in the community came from working with CD and her teaching us what that meant.”

The Sun will donate $1,000 in Dailey’s name to the Jay S. Fishman Fund at the Bruce Edwards Foundation to help find a cure for ALS.

.@UConnWBB‘s Chris Dailey will receive the Margo Dydek Award as our ’17 Woman of Inspiration.

“I’m really happy that they’re honoring her at a game we’re coming to play,” Stewart said. “CD deserves all the recognition, more than she gets.”