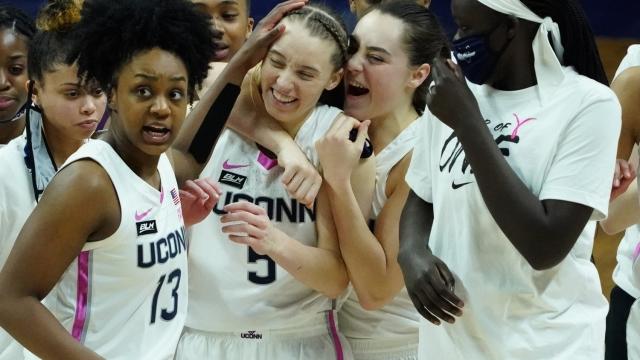 With a month of the season remaining before Selection Monday, the NCAA Division I Women’s Basketball Committee has tabbed UConn, South Carolina, Stanford and Louisville as the No. 1 seeds in the first top-16 early reveal.

If the season ended today, Texas A&M, NC State, Maryland and Arizona would be the No. 2 seeds.  The nine through 16 seeds included UCLA, Baylor, Oregon and Georgia on the three-line, while Tennessee, West Virginia, Indiana and Kentucky tabbed as No. 4 seeds.

In addition, the committee provided region assignments for all 16 seeds. Region 1 included UConn, Arizona, Baylor and Tennessee. South Carolina would be joined by Maryland, UCLA and West Virginia in Region 2. Region 3 included top seed Stanford along with NC State, Georgia and Indiana. Louisville was the top team in Region 4, joined by Texas A&M, Oregon and Kentucky.

“This first reveal brought to the forefront the unusual scheduling circumstances of the current season that we as committee members must take into account during the selection and seeding process,” said Nina King, senior deputy athletics director and chief of staff at Duke and chair of the Division I Women’s Basketball Committee. “We know that what was announced today is just a snapshot in time with a month to play before selections. We along with all fans will be watching closely over the coming weeks.”

UConn, 16-1 overall and 13-0 in Big East Conference play, on Monday moved into the No. 1 position in the Associated Press women’s college basketball top-25 poll, marking the ninth consecutive year the Huskies have been No. 1 for at least one week in the poll.

Stanford, 18-2 overall and 15-2 in Pac-12 Conference play, endured a stretch of not playing a home game at Maples Pavilion from Nov. 25 to Feb. 5. The Cardinal have won seven straight games.

The only blemish for Louisville, 19-1 overall and 12-1 in the Atlantic Coast Conference, came on Feb. 1 at home versus NC State.

Monday’s reveal was the first of two being provided this season by the committee, with the second taking place on March 1 at halftime of the Baylor-Texas game on ESPN2. The announcement of the 64-team, 2021 NCAA Division I Women’s Basketball Championship bracket will take place on Monday, March 15 during the ESPN Selection Show (7 p.m. ET).

It was recently announced that San Antonio and the surrounding region will play host to the 2021 championship, with teams competing from March 21 through April 4 to earn the right to hoist the national championship trophy at the Alamodome.

For the 19th consecutive year, an ESPN channel will broadcast all 63 games of the NCAA Division I Women’s Basketball Championship. While specific game times and channels will be announced later for all preliminary-round games, viewers can expect games to be played in the traditional championship broadcast windows, with every game of all rounds carried in full national on ESPN networks. This year will mark the 26th straight year (since 1996) that ESPN has served as the championship’s exclusive television home. All games will be available online via the ESPN app.

*Ranking and regional assignments based on games played through Sunday, Feb. 14.