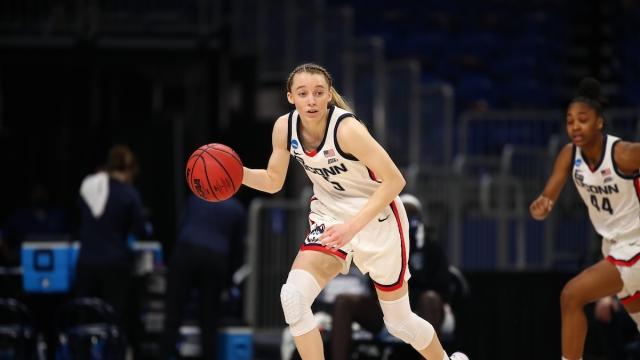 Bueckers will be honored on campus this spring and presented with the iconic Naismith Trophy, originally sculpted in 1982 by Atlanta’s Marty C. Dawe. The trophy is produced and provided by Herff Jones, leading provider of graduation and educational products and services designed to inspire achievement and create memorable experiences for students. A replica trophy will be donated by Herff Jones to the winner’s university.

“I feel incredibly blessed to receive the Naismith Trophy. It was an honor to receive the high school award last season, and truly, it’s surreal to receive the collegiate award this year,” said Bueckers. “My teammates and coaches are the reason I had any individual success this year, so thank you to them for being by my side all season. There are so many talented players who are deserving of this award, like Aliyah, Dana and Rhyne, so it’s humbling to receive it.”

Bueckers became the second Big East player to win both the Big East Freshman of the Year and Big East Player of the Year awards, following former Husky Maya Moore in 2008. Moore incidentally won two Jersey Mike’s Naismith Trophies in high school and two more at UConn. Bueckers had the highest single game scoring total by a UConn freshman since 2007 with 32 points. The freshman forward was the first player in program history to have three straight 30-point games. Her 14 assists against Butler rank as the single-game high in the history of the program. She led UConn to both regular season and tournament championships in the Big East. Bueckers is the 7th Husky to win the women’s Jersey Mike’s Naismith Trophy.

Bueckers and men’s Player of the Year Luka Garza were chosen by the Atlanta Tipoff Club’s national voting academy, comprised of leading media members from around the country, current and former head coaches, former award winners and conference commissioners, all of whom based their selections on outstanding on-court performances during the 2020-21 college basketball season. Additionally, fans had the opportunity to cast a ballot through naismithfanvote.com and on the @NaismithTrophy and NCAA @MarchMadness Twitter pages. The Naismith fan vote accounted for 5% of the overall vote. The vote was tabulated and certified by Aprio, a premier, CPA-led business advisory firm, headquartered in Atlanta.

For more information about the Naismith Awards, visit www.naismithtrophy.com.