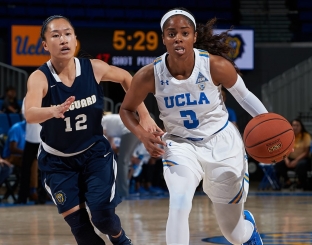 Basketballs bounce off players’ feet and fumble through their hands. Players bump into each other. Point-blank shots dribble off the rim.

The UCLA women’s basketball team calls it Vanguard, a one-minute drill during which it has to make 30 baskets without fumbled passes or turnovers while sprinting up and down the court in transition. It tests conditioning, clutch shot-making and precise passing. It’s not always pretty.

“We haven’t conquered it all year,” head coach Cori Close said. “But I’m not going to lower the standard. I know what this team can grow into.”

After making back-to-back Sweet 16 appearances for the first time in school history, the No. 8 Bruins still hope to grow in all aspects this season to eventually reach that standard.

This week on Coach’s Corner @CoachCloseUCLA talks about our preparation for games! Full video’s on our website! (https://t.co/QF7SkJLnKQ) pic.twitter.com/YeRAZHkD1G

UCLA has four returning starters and was picked to win the Pac-12 by coaches and media in the preseason poll. Senior point guard Jordin Canada is a two-time All-Pac-12 selection and the league’s reigning defensive player of the year. Senior forward Monique Billings blossomed into a double-double machine last season, recording 19 of them, which ranked second in the Pac-12 and seventh nationally. Junior guard Kennedy Burke and senior guard Kelli Hayes round out UCLA’s group of top returners.

Despite experience at the top, the Bruins are integrating three players coming off redshirts and four freshmen. Close said she underestimated the task. With only two days before the season opener against San Jose State on Friday at Pauley Pavilion, Close said the Bruins are “a little chaotic and we look a little bit purposeless” on offense. But the defensive energy and rebounding are already there.

“I think that we’re more hungry this year because there are only four returners that actually played last season,” said Canada, who averaged 17.8 points and 7.1 assists per game.

Redshirt freshman Lindsey Corsaro missed most of last season due to an injury, but started in UCLA’s exhibition game and had six points, five rebounds, three assists and two steals. Forward Lajahna Drummer and guard Japreece Dean are also coming off redshirt years. Dean, who transferred from Texas Tech, is hoping to get that season back after a waiver from the NCAA.

Close said the team has a “huge growth curve” ahead of it while mixing the new players with the veterans and will eventually be better for the offseason struggles. With a difficult nonconference schedule that includes home games against No. 3 Baylor and No. 1 Connecticut during the second week of the season, the Bruins will likely face more struggles before even starting its Pac-12 schedule that features six teams ranked in the preseason top 25.

But the Bruins have divorced themselves from whatever results may come. Instead, they’re choosing to “fall in love with the process,” Close said.

“We gain confidence from that,” said Billings, who earned her first All-Pac-12 selection last year. “We know we’ve worked hard in practice and we’ve done the best we can, so we come out to the game, it’s like whatever the result is, we put in the work.”

At practice, Close implores her players to prepare like they have done before. Only then can they accomplish things they’ve never done before.

And along the way, they may even accomplish Vanguard.

This article is written by Thuc Nhi Nguyen from Los Angeles Daily News and was legally licensed via the Tribune Content Agency through the NewsCred publisher network. Please direct all licensing questions to legal@newscred.com.