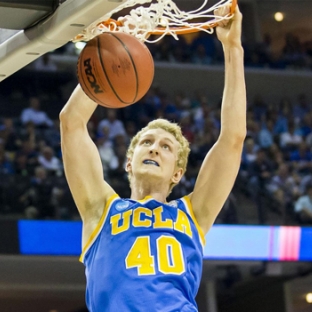 LOS ANGELES — Thomas Welsh wastes no time. The senior center walks from the film room straight to the side of the court at Pauley Pavilion and begins his pre-practice stretches. Many of his teammates meander around the court, casually shooting a few baskets before settling onto the floor with their foam rollers and resistance bands. Two freshmen, Jaylen Hands and Kris Wilkes, are among the last to get into position.

After a brief flirtation with the NBA, Welsh decided to return to Westwood. With a slew of highly regarded freshmen, UCLA needed the 7-footer back for more reasons than one. Welsh and junior Aaron Holiday provide necessary leadership for a team trying to balance youth with experience while hoping to improve upon last year’s Sweet 16 NCAA Tournament run.

“For me as a senior and having gone through so many good times, so many bad times, I think I know what’s expected of a championship-level team,” Welsh said Wednesday at UCLA’s media day on campus. “I just try to lead by example, show them the ropes, just give them a feel of what college basketball is like because none of them have gone through it yet.”

The freshmen are just getting accustomed to the long practices. Wilkes, a 6-foot-8 McDonald’s All-America guard, used to practice for an hour or two in high school. The Bruins go for three. And it’s hard work too.

“A lot of up-and-down things, five-on-five, it’s not just a couple of drills here and there,” he said. “And you gotta play hard too because everybody here is good.”

UCLA has less than one month until its season opener against Georgia Tech in Shanghai. The Bruins have six nonconference games against Power 6 conferences teams, only one of which is in Pauley Pavilion: a rematch of last year’s NCAA second-round game against Cincinnati on Dec. 16. There’s a road game at Michigan and neutral-site matchups against Creighton in the Hall of Fame Classic in Kansas City, Mo., and Kentucky in the CBS Sports Classic in New Orleans.

MORE: Meet the team facing Kentucky and Duke on consecutive days to open the season

Unlike last season, when the team went to Australia for a two-week preseason trip, this year’s freshman class will have to grow up quickly during practice in Westwood before the tough nonconference schedule.

“You’re trying to blend the old with the new. That’s similar (to last year), you’re just doing it with more new,” Coach Steve Alford said. “So with more new comes more personalities that you’re dealing with and trying to figure out how that blends.”

Coach Alford met with reporters in Pauley Pavilion on Wednesday, prior to the Bruins assembling for their annual team photo. pic.twitter.com/ooAFrAp9W2

With more size, length and athleticism, UCLA expects to be different from last year’s team that scorched box scores with the nation’s leading offense. The biggest change will show up on defense, where the Bruins ranked ninth in the Pac-12 in points allowed at 75.5 points per game.

“I feel like we just have a lot more heart than we did in the past,” Holiday said. “No offense to the other teams, but we obviously are more athletic and we can get to certain places quicker.”

When last year’s freshman class, which included three one-and-done NBA draft picks, helped revive the program from its disastrous 15-17 record in 2015-16, this year’s crop is not settling for just the Sweet 16.

“We can shoot, we can run, we’re athletic,” Hands said. “If we can put all that together, the way we pass, the way we space and play defense, I think we can win the whole thing.”

This article is written by Thuc Nhi Nguyen from Los Angeles Daily News and was legally licensed via the Tribune Content Agency through the NewsCred publisher network. Please direct all licensing questions to legal@newscred.com.