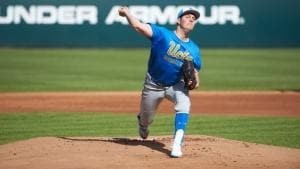 
UCLA had one of the nation’s premier teams last season but fell short of its ultimate goal — getting to the College World Series. This team will be hungrier than ever and likely won’t have the added pressure last year’s club had down the stretch, making UCLA the No. 14-ranked team in D1Baseball’s preseason top 25.

Below are a few facts to consider when breaking down the 2020 UCLA club:

UCLA FALL REPORT: How the Bruins are preparing for the 2020 season

In this preview of UCLA’s 2020 season, we’ve graded the Bruins in each characteristic of the game: Hitting, power, speed, defense, starting pitching, bullpen and experience/intangibles. But before we begin, let’s present our projected lineup for UCLA in 2020.

The Bruins had a solid offensive lineup last season. And though there’s no doubt they have some tough holes to fill this spring, this should again be a productive, albeit different, lineup.

UCLA won’t have the power production it had last season. It would be a shock if it emulated last season’s power without Jake Pries, Michael Toglia, Chase Strumpf and Ryan Kreidler. However, what the Bruins do possess are a solid foundation of experienced guys who have hit in the past.

Outfielder Garrett Mitchell is an electrifying player who hit .349 with six home runs and 18 stolen bases last season, while Matt McLain could be primed for a huge breakout season. McLain is supremely talented but struggled last season with a .203 average, four home runs and 30 RBIs. He’s ready to take a huge step forward. Jake Moberg and Mikey Perez are guys who didn’t get a lot of playing time last season, but who had solid falls and are expected to produce at the plate, while JT Schwartz is a quality middle of the order inclusion and Santa Barbara (Calif.) College transfer Pat Caulfield is expected to provide a solid punch to the outfield. There’s also backstop Noah Cardenas, who surprised some with a strong 2019 campaign with the bat, while Michael Curialle will get significant playing time. Curialle is one of those guys who can provide a nice blend of average hitting and power production.

If you’re looking for huge power, the Bruins probably won’t have that in 2019. But that doesn’t mean this team won’t at least have some gap potential.

UCLA has some tough hitters to replace from a power standpoint — Michael Toglia, Chase Strumpf, Ryan Kreidler and Jake Pries are all gone, and the quartet combined for 47 home runs last season.

With that said, there are some potential power producers in this lineup. Mitchell finished last season with 14 doubles, 12 triples and six home runs. Though he’s already a gap hitter, I bet you’ll see his home run total move into the double digits.

Matt McLain has the talent and bat speed to hit for more power this spring, too, while the Bruins will look for some pop from JT Schwartz as well. Schwartz is a talented young player who hit cleanup at times during fall workouts — a clear indication the Bruins expect him to make somewhat of a powerful impact with the bat.

Also keep an eye on Kendall, Perez and Michael Curialle. All three have a chance to hit for some power this spring.

The Bruins aren’t filled with burners, but they’ve got some guys who can make things happen with their legs.

Mitchell is the one to watch from a speed standpoint. He has gradually gotten better and better from an offensive standpoint, but the speed and stolen base potential has always been there. Mitchell took a step forward last season when he swiped 18 bases in 22 attempts. He’ll look to emulate or best those numbers this spring.

ALL-DECADE TEAM: Which UCLA stars made the Pac-12’s All-Decade team?

McLain is another impressive athlete who should improve on his stolen base numbers from last season — 6-for-8. Meanwhile, look for Kevin Kendall to once again be aggressive from an offensive standpoint. He’s athletic and can run and was perfect in stolen base attempts last season.

From a defensive standpoint, I’d look for the Bruins to have an athletic outfield, while offensively, look for UCLA to be aggressive and try to use its athleticism against teams. The Bruins won’t have the big boppers they had last season, but there will be a variety of ways they can score runs.

UCLA is in good shape from a defensive standpoint.

Behind the plate, the Bruins have one of the best in the business in Noah Cardenas, who put together a stellar 2019 campaign both offensively and defensively.

The Bruins will be strong up the middle, too, as Matt McLain moves back to his natural position of shortstop after being in the outfield last season, and junior Kevin Kendall is a stable and instinctual defender at second base. Jake Moberg is slated to start at third base, though Savage said late in the fall that the corner positions were still very much up for grabs with several guys in the mix.

The outfield has some newer faces with McLain moving back to the infield — Jarron Silva and junior college transfer Pat Caulfield will be out there with speedster and All-American outfielder Garrett Mitchell.

Look for the Bruins to be much the same from a defensive standpoint.

The Bruins have some terrific options from a starting pitching standpoint.

Junior right-hander Zach Pettway will headline the starting rotation after putting together a solid 2019 campaign. Pettway had a good fall and showed improved overall stuff and strength. The slider continues to make strides, and he’s healthy after taking it easy this past summer. Pettway has the stuff and experience to put together a dominant campaign.

Sophomore right-hander Nick Nastrini is the other proven commodity in the rotation. He is finally healthy after being sidelined for three months last season because of thoracic outlet syndrome. He pitched well in the NCAA regional action and has impressive stuff, sitting 88-91 and up to 92 mph with his fastball, along with advanced feel for his secondary stuff: a 78-82 mph changeup has good arm speed and sink, the 75-81 mph breaking ball has some 12-to-6 bite at times, and there are times when the breaking ball has more lateral break. He throws two variations of the breaking ball. He has a legit starters’ profile and the velocity will continue to increase under the tutelage of coach John Savage.

The final spot in the weekend rotation is up for grabs as the season nears. Some options include Sean Mullen, Jared Karros and Jesse Bergin.

Mullen only threw 6.1 innings last season and took one of the biggest jumps during the fall, per Savage. This past summer at the Cape Cod League, Mullen struck out 18 in 13 innings of work, while also sitting 89-92 with his fastball, 79-81 mph with his slider and 83-84 mph with his changeup.

Bergin is a talented right-hander who will sit anywhere in the low-90s with his fastball, along with two breaking balls — a slider at 83 mph and a 78 mph curveball. He’ll also attack hitters with an 83-84 mph changeup. Meanwhile, freshman right-hander Jared Karros was impressive in the fall, sitting 88-89 with his fastball with big-time upside in his 6-foot-6, 175-pound frame. Karros, at worst, could be the midweek starter.

It’s safe to say the Bruins have a multitude of options from a bullpen standpoint.

They are led out of the bullpen by a pair of experienced and talented right-handers in Holden Powell and Kyle Mora. Powell put together impressive numbers last season, tallying 17 saves and 65 strikeouts in 49 innings. Powell sits 92-93 mph with his fastball, while his calling card is a filthy 82-83 mph slider. Meanwhile, Mora is a command machine and sits 87-88 mph with his fastball, along with a plus-plus circle changeup at 81-82 mph. He’ll also attack hitters with a 74-78 mph curveball.

BRINGING THE HEAT: 22 college baseball flamethrowers who topped 96 this fall

In terms of newcomers, 5-foot-10 freshman Jake Saum turned some heads during the fall with his bulldog nature, while right-handers Charles Harrison and Adrian Chaidez are worth watching. Harrison impressed the coaches during the fall, while Chaidez is an experienced junior college arm who tallied 70 strikeouts in 51 innings last season.

Other arms to watch include Felix Rubi, Michael Townsend, Daniel Colwell, Josh Hahn, Jack Filby and Nick Scheidler. Filby will get up to 94 mph with his fastball and has good stuff, while Saum is a young arm to watch. He got his feet wet at the West Coast League this past summer and followed that up with a strong fall. Saum was 87-90 mph with his fastball at the WCL, along with a curveball ranging 71-76 mph. The breaking ball needs some fine-tuning, but that should come with Savage leading the way.

The Bruins lost several key cogs from last year’s terrific club, but they also return many familiar faces, particularly on the mound with the return of weekend starters Zach Pettway and Nick Nastrini, along with shutdown closer Holden Powell.

Offensively, there’s no doubt there are large holes to fill. But there’s also plenty of experience back with Noah Cardenas being a rock behind the plate and a key leader, Kevin Kendall and Matt McLain returning, and speedy Garrett Mitchell back for what promises to be a productive junior campaign.

Everything is setup for a terrific season in Westwood.