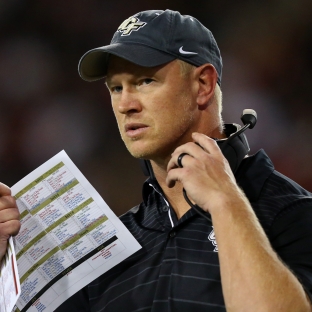 ORLANDO, Fla. — During a recent practice, the scene at UCF’s football practice wasn’t like anything one would expect the day before a big game.

Donning a pair of cleats, head coach Scott Frost took reps with the special teams units. Offensive coordinator Troy Walters, a Biletnikoff Award winning receiver at Stanford in the late 1990s, was running routes with the offense. This, while the Knights were preparing to host Memphis in their American Athletic Conference matchup.

But the festive and loose atmosphere sums up the UCF football program these days — fun and energetic while in the midst of one of the more impressive turnarounds in college football.

“The kids just love to see that,” UCF athletic director Danny White said of the coaching staff participating in Friday practices. “We have a youthful energy around our program right now that makes it fun to be around.”

It all starts with Frost, the Knights’ 42-year-old coach.

The former Nebraska quarterback is about winning but he also is about his players enjoying the experience and staying in the moment.

“It’s that more modern approach to football,” senior offensive lineman Aaron Evans said of Frost. “He’s got that experience behind him, he’s played football. He is very adamant about the team but at the same time he wants us to have fun and be a little bit individualistic.

College football: A look at every remaining undefeated team in the country

“I think that has allowed for players to be players, to make plays, to be big-playmakers. That’s what has made this team more productive and more special.”

UCF is probably ahead of schedule in terms of being ranked and a top team in the AAC, but Frost insists he hasn’t taken one moment to enjoy the success. He’s more concerned with this week’s opponent, 1-5 East Carolina, and not letting his players think they accomplished anything yet.

“I’m happy for the guys but I’m never going to say we are satisfied,” said Frost, who is in a non-Power Five conference that has three teams in Top 25 this week. “Saying I’m satisfied is like patting myself on the back, that’s exactly what I’m telling the team not to do.”

Last season, Frost came in after a stint as Oregon’s offensive coordinator, and quickly got the Knights back on the right path with a 6-6 regular-season finish and a bowl appearance. The defense was responsible for much of the success, while freshman quarterback McKenzie Milton took his lumps and the rest of the offensive slowly learned the high-octane system Frost brought with him from out west.

Now, with Milton more seasoned and players like receiver Tre’Quan Smith and running backs Adrian Killins and Taj McGowan having a better grasp of the offense, the Knights are not just beating teams, but blowing them out. They went to Big Ten opponent Maryland’s stadium and crushed the Terps 38-10 then followed that up the rout against a Memphis team that stunned UCLA earlier in the season.

The Knights were well on their way to another runaway win at Cincinnati Saturday when weather forced the game to end after three quarters with UCF comfortably ahead 51-23.

But as good as the Knights have been, Frost has remained in their ear reminding players they that real work is still ahead. Winning the AAC title and possibly playing in a New Year’s Six bowl game is the ultimate goal, not a Top 25 ranking.

This article was written by Terrance Harris from The Associated Press and was legally licensed through the NewsCred publisher network. Please direct all licensing questions to legal@newscred.com.