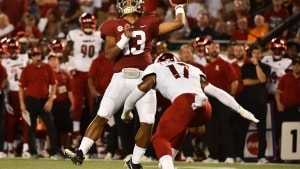 
Tua Tagovailoa wasted little time proving why he won the most hotly-contested quarterback battle in the country.

After entering the game on the opening drive for the Alabama Crimson Tide as its starting quarterback (instead of last year’s starter, Jalen Hurts), Tagovailoa produced one of the top highlights of the first weekend with a spinning touchdown pass off his back foot:

Tua Tagovailoa picking up where he left off for Bama pic.twitter.com/fEaAcHpxUd

After moving to his right, the sophomore spun away from a defender, somehow maintaining his balance, and threw a strike to wideout Jerry Jeudy.

Tagovailoa burst onto the scene last year when the true freshman entered the national championship in the second half and won Offensive MVP while leading Alabama to a title win over Georgia.

The opening drive of Saturday’s game in Tampa, Florida, against Louisville went seven plays for 65 yards and a score while taking just 3:05.

Tagovailoa completed all four passes on that drive for 60 yards and gave coach Nick Saban justification for making him the starter.