Paul Jubb is having the best year of his young tennis career.

After defeating top-seeded Nuno Borges (Mississippi State) to win the NCAA Division I Men’s Singles Championship in May, the South Carolina junior received a wild card to play at this year’s Wimbledon Championships. As a native of Hull, England — just a 4-hour drive from London — the chance to play on the biggest stage in tennis is even more special.

How’d he get the opportunity? In mid-June, Jubb picked up back-to-back wins against ATP Top 160 opponents in the Ilkley Trophy ATP Challenger event. Now he’s currently ranked No. 472 in the ATP rankings.

And he’s setting records for South Carolina as well. Not only was Jubb the first player to win the men’s tennis championship for the Gamecocks, he’s just the fourth South Carolina alumnus to ever play at Wimbledon.

YEAR IN REVIEW: Some of the best championship moments we’ll remember from the 2018-19 NCAA season

The last time the reigning NCAA men’s singles champion played at Wimbledon was in 1981, when Stanford’s Tim Mayotte advanced all the way to the quarterfinals, before losing to Australian Rod Frawley, who would fall himself in the next round to eventual champion John McEnroe.

Know what @PaulJubb3 was up to today? Just checking in at Wimbledon, hitting with long-time pros … you know, whatever.

Anyone else have a day as big-time as this, #Gamecocks? pic.twitter.com/Uml1WII1PV

And if singles weren’t enough, Jubb is also competing in the doubles tournament, playing with Jack Draper. The pair will take on Juan Sebastian Cabal and Robert Farah of Columbia, who are seeded No. 2 in the tournament.

Jubb’s first singles match will be against Joao Sousa of Portugal on Tuesday, July 2. We’ll be updating this story throughout the tournament with his performance. 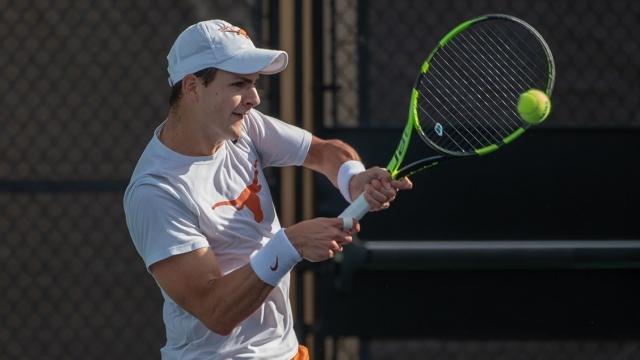 Texas beat Wake Forest 4-1 in the national championship game to claim the 2019 title in Orlando, Florida.