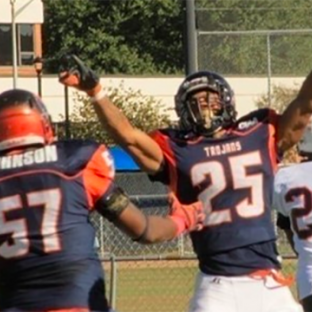 Top 25 by the numbers: Despite utter domination by the Top 10, five more upsets rattle DII football

It was a big weekend for the Top 10 of Division II football. The only team that lost was at the hands of the No. 12 team. The bottom 10, however, didn’t fare so well. Four of the lower half of the Top 25 fell in upset fashion.

Wins and losses aside, there was plenty of action in Week 8. Incredible streaks continued, running backs dropped videogame numbers, and the Northwest Missouri State defense continued to put up numbers that are borderline insane. Let’s breakdown the Top 25 by the numbers.

5 — Number of ranked teams that fell on Saturday. No. 7 Grand Valley State dropped a heartbreaker 28-27 to No. 12 Ferris State. No. 17 Slippery Rock fell for the second time in as many weeks, this time to Edinboro 49-39.  No. 18 West Alabama lost its first Gulf South Conference game of the year, 41-39. No. 19 Delta State couldn’t make up ground on the Tigers loss, falling 34-14. And No. 25 Southeastern Oklahoma lost by 30 points to Southern Arkansas, making the race for the Great American Conference wide open again.

UPSET! No. 12 Ferris State stages a fourth-quarter rally to shock No. 7 Grand Valley State in the #D2FB Showcase! #MakeItYours pic.twitter.com/gzWRr9VsNK

24.10 — Average margin of victory for the Top 10, even with Grand Valley State’s one-point loss.

73 — Largest amount of points dropped by a Top 25 team this weekend. No. 21 Virginia State’s offense continues to put up mind-boggling numbers as it climbs the rankings. That also gave the Trojans the biggest margin of victory this weel with 52. Not to be outdone No. 16 Colorado Mesa scored 70 of its own, winning by 49 points over Adams State.

Speaking of the Bearcats and Greyhounds:

38 — Number of games won in a row by NWMSU. That’s two shy of tying the DII record.

100-0 — Combined score that UIndy has won by the past two Saturdays. Yes, the Greyhounds are for real.

With so many big scores, there were plenty of individual players that shined as well. Let’s go position by position and take a look.


Return man supreme: Assumption’s wide receiver and punt returner Deonte Harris had a quiet day as a receiver, but exploded in the return game. He returned not one, but two punts to the house. The first was a 78-yard return and the second went for 76.

Deonte Harris returned two punts for TD’s and the D was dominant as No. 14 @ACGreyhoundsFB beat New Haven 41-6! https://t.co/qWvxpNrh9u pic.twitter.com/r22QYOTfSF

Upset city: Not only did Edinboro pull off a big upset over Slippery Rock, running back Walter Fletcher had a day in doing so. The running back reeled off 241 yards and four touchdowns for the Fighting Scots who are now a perfect 5-0 at home. Southern Arkansas running back Michael Nunnery ran for 112 yards and three touchdowns in its upset of the Savage Storm. The Muleriders suddenly find themselves back in the mix for the conference championship.