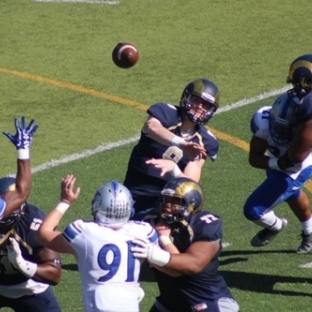 Top 25 by the numbers: Blowouts, upsets and a possible new No. 1 highlight another wild weekend in DII football

The biggest news in Division II football this past weekend was the thrilling 20-10 upset of Pittsburg State over No. 1 Northwest Missouri State. It snapped the Bearcats 34-game Mid-America Intercollegiate Athletics Association winning streak, which began and started at the hands of the Gorillas.

Championship teams know how to rally from a loss, and there’s no question that Rich Wright and his Bearcats will learn and move on from this one. While there will almost certainly be a new No. 1 in the land come Monday, the Bearcats are still a formidable opponent, and still a favorite to be in Kansas City, Kansas this December.

That wasn’t the only story this weekend, though. Three more ranked teams fell in total, and there were some big numbers put up on scoreboards across DII football. Let’s breakdown the Top 25’s weekend by the numbers.

How the Top 25 fared

3 — Ranked teams that fell on DII football Saturday. No. 1 Northwest Missouri State’s loss got plenty of attention. No. 3 Minnesota State handled upstart No. 10 Winona State 27-6. No. 23 Central Missouri may have a short stay in the Top 25. The Mules lost 48-30 to an unranked Central Oklahoma team.

642 — Number of points Top 25 teams outscored their opponents by in one of the most lopsided weekends of the season. It was a 26.75 average margin of victory.

8 — Teams that scored 45 points or more this weekend.

86 — The most points put up by a ranked team this weekend. No. 20 Bowie State handled Lincoln 86-14. Its 72 points was also the largest margin of victory on the weekend. No. 15 Colorado Mesa wasn’t far behind, however, with a 77-14 victory of its own. The Mavericks have scored 147 points in the past two weeks.

38 — Number of games of the second longest winning streak in DII football history, ended this past weekend.

142-3 — While No. 6 Indianapolis saw its two-game shutout streak come to an end, the Greyhounds have outscored their opponents by 139 points the past three weekends.

Honorable mention: 54.5 — Number of career sacks by Slippery Rock’s Marcus Martin. After recording 4.5 sacks this past Saturday (including an 84-yard fumble return for a touchdown), Martin is the all-time leader in sacks across every level of NCAA football. His performance could land Slippery Rock back in the Top 25 this week after falling out a week ago.

RUNNING BACKS — Running backs were the key this week. Two schools (Eastern New Mexico and Bowie State) had a tandem of running backs put up elite numbers. Grand Valley State’s Dre’on Kemp stole the show with three touchdowns, but Bryce Young-Walls added 101 yards of his own on the ground.

One week ago, Deonte Harris wowed DII football with two punt returns for touchdowns in the same game. It earned him Northeast-10 Special Teamer of the Week honors as well as a spot in the DII Plays of the Week.

This week, he was back at it.

Harris not only added to his lore, tying the DII football record with his fifth punt return touchdown of the season (this one 77 yards), he also scored on a 63-yard touchdown pass, showing he’s a jack-of-all-trades.

No. 3 Minnesota State knew it had its hands full with No. 10 Winona State — who had already defeated two ranked teams this season — coming to town. The defense showed up ready to play. They tallied six sacks, four interceptions and one fumble return to the house, all while allowing a mere 233 total net yards. A dominating performance by the Mavericks that will surely get them some looks as the new No.1 team come Monday.