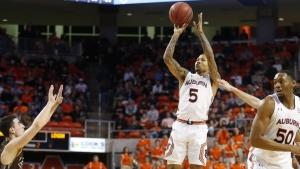 
And then there were two.

We’re just over a week into January and No. 5 Auburn (14-0) and No. 7 San Diego State (16-0) are still the only remaining undefeated men’s basketball teams for the 2019-20 season. Three-hundred and fifty-three teams started with an undefeated record in November and now the Tigers and Aztecs are in a staring contest to see who will blink first.

Both schools prevailed on Wednesday. The Tigers knocked off Vanderbilt 83-79 and the Aztecs beat Wyoming 72-52 as the two will continue to fight throughout their respective conferences.

Last year, undefeated Michigan and Virginia both lost on Jan. 19 in a pair of challenging road games at Wisconsin and Duke, respectively. Remarkably, in the 2017-18 season, the final three undefeated teams lost on the same day — Arizona State at rival Arizona, TCU at home to Oklahoma and eventual national champion Villanova at Butler.

(By the way, if you’re looking for a random, but incredible, college basketball stat to file away for trivia someday, Villanova went 68-8 in the 2017 and 2018 seasons, including winning the 2018 national title. During that span, the Wildcats were 2-3 against Butler and 66-5 against the rest of the country.)

But it’s possible both the Tigers’ and Aztecs’ perfect records survive Saturday. To use one recognized metric, kenpom.com’s percent chance of victory is 82 percent for Auburn and 89 percent for San Diego State.

Assuming the pair of top-10 teams can handle their business on Saturday, that begs the question: What is each team’s toughest remaining regular-season game?

With 16 remaining SEC games for Auburn, plus a Big 12/SEC Challenge matchup against Iowa State, and 13 remaining conference games for San Diego State, which singular game poses the biggest threat of a loss? Here are the answers.

TOP(PIN) OF THE LAND: Meet college basketball’s best player that fans need to know more about

Let’s be very clear. I don’t think Auburn will arrive in Rupp Arena in late February with an undefeated record. It’s probably more realistic to think that it’ll have three or four losses, if not five or six, by then. But if we’re going to circle the single most-difficult game left for the Tigers, this is it.

Sure, this may not be Anthony Davis’ Kentucky (or Karl-Anthony Towns’, or Malik Monk and De’Aaron Fox’s), but the 2019-20 Wildcats arguably have as much raw talent as any team in the conference, especially in their backcourt. Despite a 9-3 non-conference record, including less-than-desirable losses to Evansville and Utah, the Wildcats also beat Michigan State and Louisville — two of the six teams that have been ranked No. 1 this season, a list that also includes Kentucky.

The Wildcats will arguably go as far as their backcourt will take them with freshman Tyrese Maxey (13.8 ppg) and sophomores Ashton Hagans (12.9 ppg) and Immanuel Quickley (12.7 ppg) making up three of the team’s top four scorers.

Five of the team’s top six scorers are sophomores, juniors or seniors, which is certainly experienced by Kentucky standards.

Kentucky also travels to Auburn this season on Feb. 1 and perhaps that’s a better point of the season to try to predict the Tigers’ first loss. In an eight-game stretch, Auburn will play at Alabama, at Florida, South Carolina, Iowa State, at Ole Miss, Kentucky, at Arkansas and LSU.

Some Auburn fans might be happy with a 6-2 record in that stretch if you could guarantee them that today.

You can thank the Mountain West schedule-makers if this comes to fruition: an undefeated, likely No. 1 team in the country going on the road to play Nevada on a Saturday in its regular season finale.

There’s a lot of basketball to be played between today and Feb. 29 — 13 games, to be exact — but San Diego State is currently in first place in the Mountain West with a 4-0 record and Nevada is tied for second at 3-0.

Nevada still has talent left over from Eric Musselman’s tenure, when the Wolf Pack quickly developed into an annual NCAA tournament team and a program that would challenge for 30 wins a season. After being a key reserve last season, senior Jazz Johnson (17.5 ppg) has stepped into a larger role as a starter and the team’s leading scorer, while fellow guards Jalen Harris (17.2 ppg) and Lindsey Drew (12.7 ppg) also average double figures in points per game.

New Nevada coach Steve Alford, previously of UCLA, New Mexico and Iowa, has coached on big stages before, but preparing a game plan as the final roadblock between a powerhouse in the conference and an undefeated season would be a new kind of pressure.

Nevada currently ranks 13th nationally in 3-point percentage (38.6 percent) and seventh in opponent 3-point percentage (26.3 percent), which at face value, suggests the Wolf Pack have the statistical make-up to shoot lights-out from three and potentially fluster the opponent into a cold-shooting night. Maybe Nevada can do both on the same night.