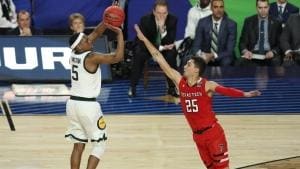 
Here are the five players Andy Katz expects to make a lasting impact on their teams in the Big Ten this season.

1. Cassius Winston, 6-1, Sr., Michigan State: Winston enters the season as the preseason Big Ten and possibly national player of the year. He is the catalyst, leader and anchor for the preseason No. 1 or No. 2 team. Winston had to shoulder more of the load last season with injuries to Joshua Langford and Nick Ward. But the development of Aaron Henry, Xavier Tillman and the return of Langford should ease some of the burden. Few players are as reliable as Winston. His value cannot be measured. He could/should leave a legacy in East Lansing.

2. Anthony Cowan Jr., 6-0, Jr., Maryland: Cowan decided to come back to Maryland where he has a chance to leave his mark with the Terrapins and lead them to a deep March run. Maryland was within a whisker of advancing to the Sweet 16 last season. This team, while it will miss Bruno Fernando greatly, still has all the pieces in place to challenge Michigan State atop the Big Ten. Cowan is the leader Mark Turgeon needs to put this team in position to do so.

Top picks for the #CousyAward from @TheAndyKatz:

3. Kaleb Wesson, 6-9, Jr., Ohio State: All you have to do to know the value of Wesson is look back to last season when he was suspended for three games. Ohio State lost them all. He came back and the Buckeyes beat Indiana to essentially earn an NCAA tournament bid. Wesson flirted with the NBA draft. He’s back and with him the Buckeyes should be in the NCAA tournament again. Without him, they would not.

PLAYERS TO WATCH: These 5 AAC players will make a difference next year

4. Zavier Simpson, 6-0, Sr., Michigan: Juwan Howard starts his college coaching career with the most important position filled. He doesn’t need to find a new point guard — at least not yet. Simpson is to Michigan what Cowan is to Maryland and Winston is to Michigan State. He was and can be the extension of the coach. His offensive game, especially the hook floater, has evolved, and with the departures of Charles Matthews, Iggy Brazdeikis and Jordan Poole Simpson will need to be even more assertive. Isaiah Livers will make big shots for the Wolverines. But Simpson will be the one to set him and others up.

5. Nojel Eastern, 6-6, Jr., Purdue: Eastern’s responsibilities will increase with the departure of Carsen Edwards. He’s not a big shot maker and won’t be expected to be one next season. But his versatility on the offensive end and his lock-down defense will increase in importance. Trevion Williams will be a major player for the Boilermakers if he can increase his production. But it’s Eastern’s overall value next season that will be most needed.