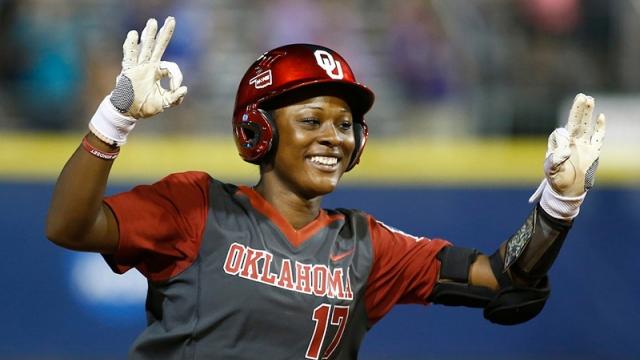 The WCWS most outstanding players, since 1982

The Most Outstanding Player award, which is given to the best individual WCWS player each year, was first presented in 1995. Since then, Arizona and UCLA have accumulated five MOPs, the most by any team. Oklahoma sits just behind with four. Of the 26 MOPs, 20 have been pitchers, with 13 being seniors.

Below is a year-by-year history of the WCWS MOPs, compiled from the NCAA record book.

Rachel Garcia’s path to the 2019 WCWS finals pivoted during the June 2 semifinal game against No. 3 Washington. Ten innings of 16-strikeout, shutout ball came to fruition at the moment her bat launched a pitch over the fence. The walk-off, three-run home run sent Garcia and the Bruins to the finals. She added another home run in Game 1 of the finals against No. 1 Oklahoma.

DREAM-WORTHY: Rachel Garcia tells the story of an emotional — but fairytale — 2019 season

Tying a WCWS record of 13 hits, Florida State’s Jessie Warren had a .520 batting average, two doubles, two home runs, four RBI and six runs scored in the 2018 WCWS. She helped lead the Seminoles to their first WCWS Championship Series. During Game 1, Warren hit a pair of doubles, then preserved the 1-0 lead with a seventh-inning diving catch off a sac-bunt attempt. The acrobatic play capped ESPN SportCenter’s Top Plays.

Warren batted 3-for-4 with a home run, two RBI and two runs scored in Game 2. The 8-3 win over Washington gave FSU its first WCWS Championship.

Knighten cruised to a career-best 12-game hitting streak through every game of the 2017 postseason.

As a sophomore, Parker led the nation in wins (38), placed second in shutouts (14) and 10th in strikeouts (269). In that same year, Parker won the 2016 WCWS MOP after pitching seven innings of one-run ball to beat Auburn for the championship.

Lauren Haeger’s .571 batting average in Oklahoma City helped the Florida Gators to their first back-to-back national championships. From the circle, Haeger dominated with 24 consecutive victories to start the 2015 season. She ended the year with a 32-2 record and 1.23 ERA and hit .347 with 19 homers and 71 RBI.

Even more impressive than her 2015 MOP honor — she joined Babe Ruth as the only DI softball, DI baseball or Major League Baseball players to reach 70 career victories and 70 career home runs.

Hannah Rogers needed only 80 pitches to lift Florida over Alabama in Game 1 of the 2014 WCWS finals. Her save in Game 2 clinched Florida’s first WCWS title, ending her NCAA tournament career with a 0.64 ERA.

No. 1 seeds don’t always reach the WCWS finals. But No. 1 Oklahoma, led by Keilani Ricketts, won the championship in an exasperating battle with Tennessee. Game 1 went 12 innings, ending on Lauren Chamberlain’s two-run walk-off home run. Ricketts then drove in all of Game 2’s runs, including her 50th career home run, to clinch the 2013 championship and punctuate her career-best 21 game win streak.

Jackie Traina threw every WCWS pitch for Alabama, even striking out 11 Sun Devils, the defending champions, to advance to the semifinals. The win placed Traina in sole possession of Alabama’s single-season record for wins (42).

Against Cal in the semifinals, Traina threw a two-hitter and batted 2-for-3 with a home run. She went 2-for-4 with three RBI in the Game 2 finals win over Oklahoma and drove in the series-winning run in Game 3. Thanks to Traina, Alabama became the first SEC team to become WCWS champions.

Co-Most Outstanding Players has only been awarded once. Arizona State’s Dallas Escobedo and Florida’s Michelle Moultrie secured the honor after duking it out in the championship series.

Moultrie batted .542 in the same span, going 13-for-24 with four home runs and seven RBI. Escobedo and the Sun Devils ended up winning the 2011 WCWS title over Florida.

UCLA could not have clinched the 2010 WCWS title without Megan Langenfeld. Her 12-for-17 (.706) performance was the second-best total for one WCWS. Her 1.529 slugging percentage set a WCWS record. At the same time, she went 3-0 in the circle with 17 strikeouts in 24 2/3 innings of work.

Langenfeld’s performance became Bruins lore when she homered twice, one of which was a walk-off in extras, in Game 1 of the WCWS finals. Add another home run in Game 2 and Langenfeld finished 6-for-8 with five RBI to seal the title.

Danielle Lawrie used her bat and arm to become the 2009 MOP. She shut out seven of the top-10 teams in the NCAA tournament, including No. 1 Florida in Game 1 of the finals when she struck out 12 Gators. Along with pitching the Huskies to a 3-2 win over Florida in Game 2, Lawrie went 2-for-3 with an RBI to secure the national championship.

FROM THE SOURCE: Danielle Lawrie breaks down 3 of her biggest WCWS moments

Arizona State’s Katie Burkhard pitched back-to-back shutouts against Texas A&M in the championship series. Her 13 strikeouts in Game 2 tied the record for most in a championship game and ultimately led the Sun Devils to their first WCWS title. Burkhart finished her senior year with a 0.75 ERA and 41-5 record.

Taryne Mowatt pitched eight complete games, tossed 60 innings and threw 1,035 pitches over the seven-day WCWS stretch in 2007 when she was the only Wildcat to pitch. Her tough workload led to several WCWS records, including victories (6), innings pitched (60), strikeouts (76) and complete games (8).

Alicia Hollowell started both semifinal games against Tennessee and both finals games against Northwestern. Through those 27 innings, Hollowell allowed one run over 15 hits — nine of those in Game 2 of the finals. She also struck out 45 batters in that span. Hollowell ended the year with a 0.89 ERA, which oddly became her second highest season ERA over her four-year career.

Before advancing to the championship series, Samantha Findlay went 2-for-3 with a two-RBI double in the 4-0 second round win over Texas. She then drove in all four runs in Game 2 of the championship series, including three RBI in the 10th inning to break the tie and win the title, 4-1. Findlay slugged .725 with 17 RBI and a .400 average throughout the NCAA tournament. She was the first freshman and first baseman to earn the MOP honor.

A 3-2 record across the WCWS doesn’t exactly spell out an MOP-type performance. But by looking a bit deeper at Kristin Schmidt’s statistics, you’ll find why she beat out many for the 2004 MOP award. She compiled a 1.72 ERA, allowing 10 runs, 36 hits and 10 walks over 40.2 innings. A series best 44 strikeouts over four complete games made Schmidt stand out from the rest. Finally, her 600 pitches and four complete games placed her in prime position to become the first MOP in history not to participate in the championship game.

GOERL: How the only no-hitter in a WCWS championship game almost ended

Finch and the Arizona Wildcats returned to the championship game in 2002, but Jocelyn Forest’s season could not be matched. Her 4-0 WCWS record with a 0.50 ERA and 33 strikeouts in 28.0 innings made Cal unstoppable. She out-pitched Jennie Finch, allowing just one hit through seven innings. The 6-0 victory was Cal’s first women’s team title in school history. Here’s Forest’s 2002 season in a nutshell: 29-12 record and 1.11 ERA.

UCLA’s Amanda Freed pitched the WCWS title game again in 2001. She threw with better precision in the circle, but Arizona’s Jennie Finch was just a tick better, shutting out the Bruins, 1-0. Finch’s seven scoreless innings of four-hit ball included 7 strikeouts and, eventually, a union with the 2001 WCWS championship trophy.

Like many MOPs before her, Jennifer Stewart was trusted with every pitch. She won all four Oklahoma WCWS games in 2000, giving up just two runs in 23 innings.

SOONERS: Here are the best Oklahoma Sooners at each position

The championship game was a prime example of her skill. Stewart faced UCLA’s Amanda Freed in a pitcher’s duel. Both pitched seven innings, but Stewart allowed just one run on eight hits for the 3-1 win over the Bruins. It was the Sooners’ first national championship.

Shoulder injuries were an issue for Julie Adams. She redshirted during the 1998 season while recovering from shoulder surgery. Her bounce back was heavily felt during conference play in 1999, when she batted .341 with four home runs, 21 RBI and five doubles.

Adams maintained her domination in the WCWS despite dislocating her left shoulder in the opening game against DePaul. In the championship game against Washington, she went 2-for-3 with two RBI. Adams is just one of two third baseman to earn the MOP honor.

In a career that included two national ERA championships and four All-America honors, Amanda Scott put Fresno State on the softball map. Back-to-back reigning champion Arizona challenged Scott and the Bulldogs in the 1998 championship game. But her precision in the circle was the deciding factor. Scott pitched seven scoreless innings for the 1-0 victory — the first WCWS title in Fresno State history.

Nancy Evans was one of Arizona’s five first-team All-Americans from the 1997 season. She threw all five Arizona games at the World Series, helping lead the Wildcats to their fifth WCWS title and second back-to-back effort. In the championship game, Evans went 1-for-3 with three RBI, a double and a walk. In the circle, she pitched five innings, allowing two runs and five hits.

There’s only one second baseman to win the WCWS Most Outstanding Player in history. Jenny Dalton has reserved that spot. As a senior, she became the Pac-10’s first Triple Crown Winner by hitting .469, knocking 25 home runs and driving in 109 runners. Dalton led Arizona to its fourth WCWS title in 1996, going 1-for-2 with three RBI, a home run and two walks to close out the championship game. Years later she told NCAA.com, “That home run in the first inning was actually a miraculous mistake.”

“That home run in the first inning was actually a miraculous mistake.” @JennyDaltonHill reflects on the 1996 #WCWS, where she led @ArizonaSoftball to a National Championship and was named tournament Most Outstanding Player. pic.twitter.com/DaHNvI5yb6

Hailing from Australia, Tanya Harding spent one season with UCLA, leading them all the way to a title. She pitched and won all four games in the 1995 WCWS, posting a 0.75 ERA. She also batted .500 with six RBI. She left UCLA shortly after with a 17-1 career record.