The top 150 hitters in college baseball, according to D1Baseball analytics

We hope that you’ve enjoyed checking out our breakdown of the preseason top-25 teams. To continue in our preparation for the 2020 college baseball season, we have also generated a computer version of top hitters with a method used by most organizations to identify potential prospects: statistical analysis.

We have approached the analytics process in similar fashion — to identify possible under-the-radar prospects. Hitting has been broken down into three categories: Plate Discipline, Hit Ability, and Game Power. Plate Discipline (PD) is a measure of how well a batter controls the strike zone. Hit Ability (HA) simply measures a batter’s ability to hit and reach base while Game Power (GP) is straightforward: Does the prospect produce extra-base hits, getting to the power he may show in batting practice?

Adjustments have been made to account for park effects of the most extreme hitter and pitcher-friendly parks, as well as an adjustment for a team’s strength of schedule. Our analysis is based on 2019 spring season statistics only, and it does not take into account a prospect’s position. For example, a middle of the diamond player has more value than a corner player with a similar score. Nor do the scores consider a player’s age, athleticism, swing mechanics, bat speed, running speed, defense or throwing tools. This list is all about bat skill and identifying hitters who have statistically performed in areas that are proven to correlate into professional baseball. Players are graded from 0-100.

Scroll left to right for all grades. 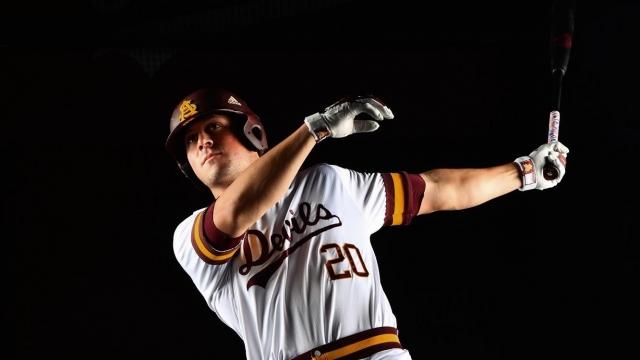 Spencer Torkelson has had an incredible career with the Devils, and he could top the icing on the cake this season by helping Arizona State get back to Omaha.

After two top-five wins, Arizona State is this week’s Team of the Week in women’s hoops

The Sun Devils notched two very impressive wins last week knocking off both No. 2 Oregon and No. 3 Oregon State. Arizona State has been named this week’s Team of the Week after doing something that hasn’t been done in ten years.

South Carolina is the new No. 1 in the AP Top 25 women’s college basketball poll

For the fourth time this season, there’s a new No. 1 in women’s college basketball. The South Carolina Gamecocks lead the new AP Top 25 Poll, and newcomers Iowa and Arizona State appeared this week.