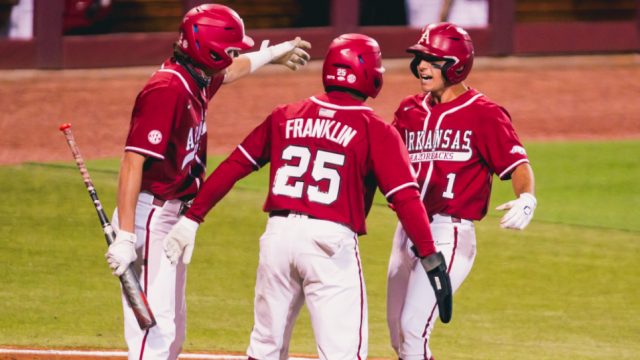 The scariest lineups in college baseball, so far in 2021

The NCAA tournament is right around the corner, and soon, we’ll know the field that will battle on the Road to Omaha. For these seven teams, hopes are high that their bats stay hot and propel them deep into June.

In taking a look at college baseball’s scariest lineups, we had to ask ourselves one very important question: what constitutes a scary lineup? Obviously, we all love home runs and thus, the ability to hit home runs and the number of sluggers in a lineup certainly helps. But not every run-producing lineup is stacked with power, so we looked at team leaders in batting average, doubles, on-base percentage and possibly the most important stat in this conversation: runs scored. After all, runs win ball games, and the more productive a lineup is from the leadoff spot to the nine-hole generates more runs.

Minus Wright State, who is 22-10 and 21-3 in the Horizon, all that run scoring has led to at least 30 wins for every team on our list. And it’s important to point out the Raiders have played 10 less games than the rest.

(all stats through Sunday, May 2)

Arkansas has been looking very much like the OmaHogs, holding down the No. 1 spot for most of the college baseball season. A large part of that is this explosive lineup. As a team, Arkansas is hitting a mere .282, but the Razorbacks lead the nation in home runs with 76 and are third overall with 347 runs scored. Their .901 team on-base-plus-slugging percentage (OPS) is not too shabby either.

Top to bottom, this lineup can hit, but the heart of the order is a nightmare for opposing pitchers. Matt Goodheart gets things going from the two-hole, hitting .321 with 11 home runs, one of four Hogs with double-digit dingers. Nos. 3 through 6 — Cayden Wallace, Brady Slavens, Christian Franklin and Robert Moore — follow and have combined for 40 home runs and 159 RBI while hitting a combined .303.

Here’s what’s scary about the Monarchs: they have all this firepower, and Ryne Moore took home the latest accolade… for CAA pitcher of the week. This team is balanced, but we’re not here to talk about strikeouts, we want to talk about the long ball and runs.

Ready for the Monarchs’ resume? They are hitting a smooth .300 as a team, they are right behind Arkansas with 74 home runs and 311 runs scored, and have a .942 team OPS thanks to the second-best slugging percentage in college baseball (.540).

In last weekend’s series win over then-No. 15 Charlotte, Kyle Battle got the hit parade going in each of the three wins. He had six hits, with three home runs and seven total RBI. He’s hitting .307 with a 1.167 OPS and a team-high 14 home runs out of the leadoff spot. Carter Trice and Andy Garriola have been steady in the three-hole and cleanup, respectively. Trice is hitting a team-high .359 while Garriola has knocked in a team-best 53 runs.

Talk about stacked. The Wildcats lead college baseball with a .333 batting average and .435 on-base percentage. They are fourth in slugging percentage at a .511 mark, making their living in the gaps with 95 doubles (third-best in college baseball) and scoring 355 runs, second-most in the division.

Jacob Berry has been feasting in the cleanup slot as the team leader thus far. He’s hitting .400 with a 1.252 OPS.His 49 RBIs lead the Pac-12 and his 11 home runs are second to Cal’s Dylan Beavers. He’s not alone, as seven of the eight remaining regulars in the lineup are hitting .310 or better. Top to bottom, there is no rest for opposing pitchers. If they make it to the six-hole, Daniel Susac is hitting .342 with 10 home runs and Nik McClaughry is hitting .312 batting ninth.

We all know about Kumar Rocker and Jack Leiter leading this team, but there are bats aplenty in the ‘Dores lineup. Even after a rough weekend in Gainsville, Fl., as a team, the Vandy Boys are hitting .300 with 55 home runs and 303 runs scored.

Dominic Keegan is probably the flashiest name of the bunch, and well-deserved. He’s hitting .359 with 11 doubles, two triples and seven home runs. But this is a lineup of balance: Enrique Bradfield, Jr., Isaiah Thomas, Jayson Gonzalez and CJ Rodriguez are all hitting over .300 and have scored 116 of the Vandy Boys 303 runs scored. You don’t get to 32-9 and the No. 2 spot in college baseball on pitching alone — this team can hit.

After a mid-April slump, the Salukis are rolling again, winners of five in a row. Tristan Peters is the spark plug, leading the team with a .364 average and .471 OBP. He also has a team-high 14 stolen bases for a team pretty active on the base paths. Nick Neville, J.T. Weber and Vinni Massaglia have slugged 34 home runs and driven in 107 runs.

No one has scored more runs in college baseball than the Horned Frogs. TCU has scored 360 runs, but it is also the unicorn in the mix: the Frogs are the only team on our list not in the top 30 in home runs (although they are fourth in college baseball with 91 doubles), but are in the top 10 in stolen bases with 86. It’s paid off as TCU has risen to its highest ranking since the beginning of 2018 coming off its fourth-straight trip to Omaha.

It’s somewhat amazing what Phillip Sikes has done this season batting in the lower third of this lineup, but it’s a testament to how many Frogs are typically on base. He leads the team with a .377 average, a 1.188 OPS, 17 doubles and 50 RBI. Brayden Taylor brings the lumber, leading the team with 10 home runs while Hunter Wolfe has made a living in the middle of the lineup hitting .336 with 13 doubles, six home runs and 37 RBIs. Also an impressive note, this team is only striking out roughly 20 percent of the time and walking nearly 15 percent of the time (as evidenced by their .419 OBP), so the Frogs are efficient in their ABs.

Can’t leave college baseball’s leader in scoring off this list, can we? After a slow start at Vanderbilt and Alabama, the Raiders have settled in, winning their last eight in a row and as of this past weekend, was the only team in college baseball averaging double-digit runs per game, leading the circuit with 10.1 per outing. As a team, Wright State is hitting .327 with a 1.004 OPS, 55 home runs (as many as Vanderbilt in 10 less games) and 324 runs scored, seventh-best in the division, again, in 10 or 11 less games than everyone ahead of them.

The Raiders have five players with an OPS over 1.000 with Alec Sayre leading the way. Hitting in the five spot, Sayre in hitting .440 with a 1.320 OPS and seven home runs. Quincy Hamilton — who bats atop the order in the two-hole — is leading the team with 10 home runs, but Wright State has five players with at least seven home runs. This team is scoring big, and hopes to return to the NCAA tournament for the first time since 2018.