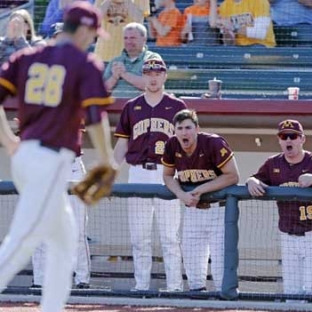 The road to Omaha: A (rainy) day in the life of the Big Ten tournament

BLOOMINGTON, Ind. — True, it’s a given that the Big Ten teams, lined across the snowy Midwest as they are, have a challenge keeping up with the suntanned big boys of college baseball.

This ain’t basketball. The league has produced one College World Series team in 31 years – take a bow, 2013 Indiana – and nobody to finish in the top four in the CWS in 33 seasons. There is not a conference member in the top 25 of the RPI at the moment.

But that doesn’t mean the league can’t be appealing. Here’s a rainy day at the conference tournament Wednesday, to see why Big Ten baseball can still be interesting.

Indiana opens the tournament as No. 6 seed. The Hoosiers also own the best RPI spot in the Big Ten, at No. 28. Doesn’t quite compute, does it?

Anyway, they’re hosting this tournament in Bart Kaufman Field — the house that a donor’s money built, but Kyle Schwarber once electrified. If you think he hits long home runs for the Chicago Cubs, you should have seen some of his rockets in an Indiana uniform.

Good thing on this ugly weather day, the place is all turf.

The Hoosiers jump ahead of Minnesota, but the Gophers storm back for a 5-4 lead in the seventh on an RBI single by Terrin Vavra, whose father Joe is a coach for the Minnesota Twins.

Lots of big league ties out there. Pinch hitting for the Hoosiers is Austin Cangelosi, whose father John played for 13 years for seven different major league franchises. On the Indiana bench is Jake Matheny, whose father Mike manages the St. Louis Cardinals.

Brian Glowicki snuffs out the Hoosiers for his 16th save. Two years ago, his ERA was 6.17. Now, it’s 1.76. Afterward, Minnesota coach John Anderson looks like he has spent a long day in a rain forest. This is Anderson’s 36th year coaching Minnesota. Let’s give him the floor to explain what the Big Ten must endure, because he certainly knows.

“First and foremost, if you look at our league we have to play a lot of road games. It’s hard to build an RPI unless you can win on the road. If you study the national statistics home and away, you’ve got some teams playing 40 home games and some teams playing 18. How do you compare those two teams at the end of the year? Our game’s built around the last at-bat.”

Take Michigan, at No. 16, the highest ranked team in the league. The Wolverines traveled 8,538 miles for 15 contests before their first home game this season. Sounds like a lot, but 2016 was even worse, when they flew 18,454 miles before playing at home.

“Then we fight weather all the time. We’ve played five doubleheaders in the Big Ten this year. That’s 10 of our 23 games. That affects your catcher, your closer, your bullpen. I’ve told people many times, if you can compete in this part of the country, and you can deal with all the challenges that come your way, you’re a pretty strong individual.”

Or as Northwestern second baseman Alex Erro would say after the second game, “It’s been pretty standard for us. The past two months of the season, we brought the rain with us wherever we go.”

So what’s a conference to do? Anderson tries to explain.

“We’re building beautiful new facilities, we’re hiring new coaches, people are getting fired. My first 25 years in the league, nobody got fired. Now look what’s going on. We have all these new coaches, I’m just an old fossil hanging on here.

“We’re trying. The institutions are making investments. They’re paying the coaches more. Assistant coaches are getting paid more. But we just don’t have weather. And until we can play more home games, I’m not sure we can change how our league is.”

Still raining as the next game starts . . .

Northwestern seems to have Cinderella stories in every sport. The guy who starts on the mound for the Wildcats against Michigan is Cooper Wetherbee. As a senior, he has a 3.03 earned run average, the best on the team. As a freshman and sophomore, he played trumpet for the Northwestern marching band and dabbled in club baseball. Then he decided to walk on the varsity.

He nurses a 4-3 lead into the fifth, before the Wolverines get to him for two more runs and end his day.

By the way, did you know that this is the Wolverines’ 151st season of baseball? Michigan was playing the game two years after the Civil War.

The Wolverines carry a 4-3 lead into the ninth, and turn the game over to Jackson Lamb, who hasn’t given up an earned run in 28 innings this season. Two Northwestern singles and a walk load the bases with no out, and that’s it for Lamb. The Wildcats, who haven’t won a tournament game in 11 years or played in one in seven, end up scoring three runs for a 6-4 victory. A 24-28 team beating a 42-13 favorite.

“We want to gain some respect for our program,” Erro says, “and I think we’re doing that by showing top-notch teams we’re not here to mess around.”

In the unaccustomed winner’s bracket, the Wildcats don’t play until 8:30 p.m. Thursday. Good thing. Several of the players have final exams to take in the morning. This is still Northwestern.

The rain slows for the next game…

The conference coach of the year caught the last out of the 2002 World Series – a fly ball to center that set off a party in Anaheim. Nearly 19,000 men have played in the big leagues, and he is the only one to win Gold Glove awards as both an infielder and an outfielder.

That’d be Nebraska’s Darin Erstad. He also once helped the Cornhuskers win a national championship – as a punter on the football team. Now his baseball team just clinched their first regular season conference title in 12 years, and open the tournament against Purdue — the team that in one season went from 10-44 to 29-25, biggest turnaround in the nation.

It is a long, wet slog, to Nebraska’s 15-9 victory. The two teams combine for 10 doubles, four home runs, and throw 347 pitches. “Just another opportunity to grow for those guys,” Erstad says of the conditions. “If you want to be a baseball player, we play outside. That’s part of the deal.”

There are some noteworthy features. Nebraska starter Jake Hohensee allows 10 Purdue batters to come to the plate in the five-run second, but retires 15 of 17 men the other five innings he works. Cornhusker right fielder Mojo Hagge reaches over the wall to rob Alec Olund of a two-run homer in the top of eighth. In the bottom, he homers to almost the exact same spot.

It goes so long, the Iowa-Maryland game is postponed to Thursday, so there will be no power display this night by the Hawkeyes’ Jake Adams, who is second in the nation in homers.

The day ends as it began, nearly 12 hours earlier. Wet. There are higher regarded leagues than the Big Ten playing conference tournaments this week. Certainly dryer ones. But how many of them can say they have a World Series champion on the bench, and a trumpet player on the mound?