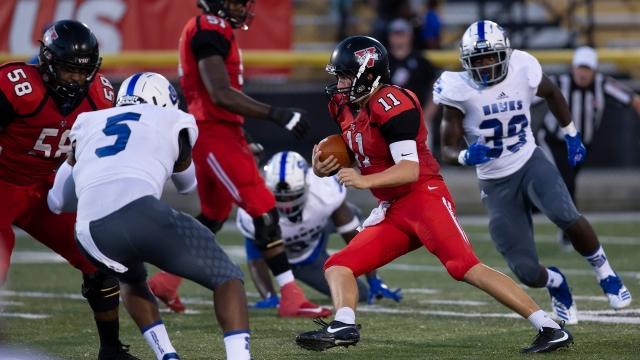 
Valdosta State was one of nine undefeated teams in the 2018 DII football championship tournament and the only one to run the table, finish 14-0 and win the title. With one week remaining until the 2019 selection show, there are 10 undefeated teams looking to hear their name called for the bracket on Sunday, Nov. 17, with an unblemished record.

Let’s take a look at those teams and what lies ahead for each. Note, this is through Week 10, which was a week that saw Notre Dame (OH) fall in overtime to start Saturday’s schedule. Check back for the updated list each week of the season.

The Blazers have won 24 in a row, though their Week 8 win was as close as it gets. Rogan Wells broke a 40-yard touchdown on 4th and 2 with 49 seconds left to secure the 20-15 win over North Greenville. Valdosta State is looking to match Northwest Missouri State’s run in 2015 and 2016 of back-to-back undefeated national championship campaigns.

The Bulldogs were three points shy of becoming the first 16-0 team in DII football history last season. Jayru Campbell has had an injury-riddled 2019 but Travis Russell has played well in his stead. The Bulldogs took down Grand Valley State 21-16 in The Anchor-Bone Classic on Nov. 9 to win another GLIAC title.

The Texans are rolling the competition whether it be at the FCS level or nationally-ranked opponents. Earlier this season, Tarleton State downed its second top-25 opponent of the year, both of which have come in double-digit wins.

The Mavericks have owned the Northern Sun Intercollegiate Conference with 34-straight conference victories dating back to October of 2016. They picked up a big win in Super Region Four against Sioux Falls on Nov. 9.

Once again the Tigers, are running through the Great American Conference. The Battle of the Ravine against a tough and regionally-ranked Henderson State will make for a tremendous regular-season finale.

The Bears pulled through in a tremendous South Atlantic Conference matchup against nationally-ranked Wingate, winning 20-13 at Moretz Stadium. Lenoir-Rhyne has now reeled off 12-straight at home, the second-longest current streak in DII football.

The Orediggers have been impressive, and the emergence of freshman quarterback John Matocha has complemented the already strong offense very well. The scarier part is that the Mines pulled off back-to-back shutouts earlier this season and are a well-rounded, fine-tuned machine heading down the stretch.

The Rock is in the driver’s seat and locked up the PSAC West with a last-second field goal to beat Cal (Pa) on Nov. 2. Slippery Rock hasn’t lost a conference game in the regular season since 2017. The Rock won the PSAC championship defeating then-undefeated Kutztown 37-35.

This offense has been fun to watch since the second-half rally on opening night. The defense has been prone to letting up a lot of points, which will make the matchups against Pittsburg State and Northwest Missouri State’s high-flying offenses intriguing, to say the least. The Mules passed the test against the Gorillas setting up a big showdown the final week of the season.

The Bulldogs handled one of its threats to the CIAA crown in Week 7, and completely dominated Virginia Union one week later. Ja’Rome Johnson has been impressive in the post-Amir Hall era, allowing the Bulldogs to not skip a beat in remaining the cream of the crop in the CIAA.