The must-watch games in Week 8 of women's college basketball

Plenty of conference foes clash in Week 8 of women’s college basketball. Here are the must-watch games in Week 8: 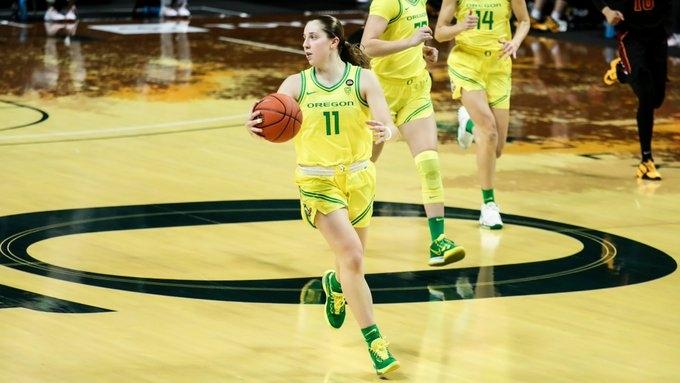 Take a look back at the last few matchups between these Pac-12 opponents and note that Oregon beat Arizona three times last season. In fact, the Ducks have a 10-game winning streak against the Wildcats.

Oregon is 9-2 with its only two losses coming back to back to ranked Pac-12 opponents UCLA and Stanford. The Ducks bounced back against Cal, 100-41, on Sunday.

Arizona will have to find a way to slow down Oregon’s scoring load. Four Ducks score in double digits and Oregon is the best shooting team in the Pac-12 at 48.6 percent.

Keep an eye on Arizona All-American guard Aari McDonald, who has scored in double figures in 76 straight games. This is the longest active streak in the nation. McDonald also leads the Pac-12 in points and assists per game at 25.3 and 4.3.

There’s two games you don’t want to miss Sunday. First is a showdown in the SEC when No. 7 Texas A&M takes on No. 14 Mississippi State.

Texas A&M has a seven-game losing streak against the Bulldogs, but are unbeaten this season with a 12-0 record. The Aggies almost got their first blemish against Arkansas, but survived with a nail-biting win, 74-73, on Sunday.

The Aggies have a balanced attack, led by Aaliyah Wilson at 15 points per game.

Mississippi State’s Jessica Carter leads the offense down low with 17.5 points per game. The Bulldogs have only faced one ranked opponent this season. That was Kentucky, which gave Mississippi State its second loss of the season in overtime. Since then, the Bulldogs have been on a two-game winning streak against SEC opponents Florida and Ole Miss.

Editor’s note: This game was postponed because of COVID-19 protocols. Louisville is scheduled to host Florida State instead.

Autumn Johnson’s work has appeared on NBA 2K League, ESPN+, WJBF, R3play.TV and SB Nation. She is a graduate of Kennesaw State University where she earned a degree in Journalism and Emerging Media Studies. You can follow her on Twitter @autumnjohnsontv.

Welcome Makyra Tramble and Riley “Fitz-Swatter” Fitzwater to our roundup of DII women’s college basketball’s players of the week.

Washington State scored a thrilling 71-69 home win in overtime against then-No. 7 Arizona and made history by being named to the Associated Press top-25 poll for the first time in program history.