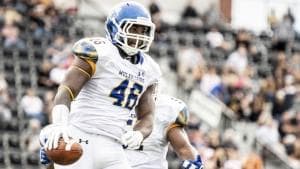 IUP racked up 31-consecutive home wins beginning on Nov. 22, 1986, against West Chester as hosts of the PSAC Championship game. It lasted a DII record six more seasons until Oct. 17, 1992. The Hawks nearly kept the streak alive, losing 35-33 to Towson on Halloween two weeks later. Eerily enough, Towson also happened to be the team that IUP lost to the week prior to the start of the historic win-streak.

Southern Arkansas enters the 2019 season the closest to making history, winners of 16 in a row at Wilkins Stadium. The last time the Muleriders lost at home was a wild one. They dropped 42 points that Sept. 19, 2015 day, but Harding scored 70. The Muleriders have not lost at home since. Their streak will be put to the test early in 2019 when Harding — a program that has made three-straight DII tournament appearances — returns to Magnolia, Arkansas on Sept. 21. The Muleriders have five home games on their 2019 slate.

Colorado State-Pueblo trails the Muleriders by one game, winners of 15 in a row at home. That shouldn’t come as a surprise. There is little reason to think it would be easy for visiting opponents to win at a home venue called The ThunderBowl.

The ThunderWolves last loss at home was a 26-10 defeat on Sept. 10, 2016, to West Texas A&M. They won the final five of that 2016 season at home and have consecutive 5-0 seasons in Pueblo. Their streak is certainly one to watch. CSU-Pueblo opens its home schedule in Week 3, hosting expected top 25 rival Colorado School of Mines on Sept. 21 before 2017 national champion Texas A&M-Commerce comes to town one week later. If the ThunderWolves survive that, they can survive anyone.

Notre Dame (OH), Tarleton State and the reigning champion Valdosta State Blazers are tied for the next longest win streaks, all winners of eight in a row. The Falcons cruised to the national semifinals undefeated last year while Tarleton made it to the quarterfinals with a perfect record.

The Texans host both Texas A&M-Commerce and MSU Texas — two teams projected to be in the top 25 — in Stephenville, Texas this season, so continuing the streak will be well earned. For Notre Dame (OH), it hosts Fairmont State in Week 3, the second home game of the season. Fairmont State, a 9-2 team a year ago, was a perfect 6-0 on the road in 2018. In fact, the last time Fairmont State lost on the road was Oct. 7, 2017, at none other than Notre Dame.

Then there is Valdosta State. The Blazers also have the longest overall current winning streak in DII football at 15 straight games with those eight in a row at home, plus six in a row on the road, and of course, that one thrilling win at McKinney, Texas for the DII football championship. In a loaded Gulf South Conference that seems to send three or four teams to the tournament every season, every one of those winning streaks will be on the line.

Football is Back! First practice of fall camp underway for the ‘Dawgs on new turf surface at Top Taggart Field! pic.twitter.com/4v9tc0t4Ff

What about the road warriors of DII football? Minnesota State, who has won 24-straight conference games, sits atop the pack with 13 consecutive road wins after seeing its eight-game home winning streak snapped in the semifinals to Ferris State in 2018. That road win puts Ferris State at 11, tied for the second-longest road streak in DII.