Kevin Gaffney couldn’t eat. He was too exhausted.

The former Cincinnati guard had every reason to be. He had just played in the longest college basketball game in Division I men’s history, according to the official NCAA record book.

On Dec. 21, 1981, his Bearcats defeated the Bradley Braves 75-73 in seven overtime periods at Robertson Memorial Field House in Peoria, Illinois. It took 75 minutes of game time (35 of which came after regulation) to determine a winner. Cincinnati guard Bobby Austin and Bradley center Donald Reese each played 73 minutes — another single-game record that stands to this day.

“I know me and my roommate, Dwight Jones, we wanted to go straight to the hotel,” Gaffney told NCAA.com in a phone interview. “I don’t even think we took off our sweatpants — hopped on the bed and was gone.”

“It was a very competitive game,” said Dave Snell, the radio play-by-play voice of Bradley men’s basketball. “It was ballyhooed because Cincinnati used to be in the Missouri Valley Conference. That was when both teams were very good (and) fighting for a championship.”

“So the rivalry, from days gone by, added a lot to that game.”

Snell has called Braves games since 1979. He’s seen his fair share of history, from Hersey Hawkins’ 63-point performance against Detroit in 1988 to Bradley’s Sweet 16 run in the 2006 NCAA tournament.

But the seven-overtime classic against Cincinnati was, and still is, unprecedented. Snell was also nursing a sore throat during the game. And as the night dragged on, it had to be dealt with. He kept drinking water to stay fresh.

Chuck Buescher, a former Bradley player and longtime high school basketball coach, was on the broadcast with Snell.

“I don’t remember exactly which overtime,” Buescher said. “But in the second or third overtime, Dave says to me, ‘If this doesn’t end, I gotta go to the bathroom. You may have to do the play-by-play.'”

Fortunately, Snell made it back before the action resumed. But take the word “action” lightly.

“(This game) was before the shot clock or the 3-point shot,” Snell said. “That’s why it went so long, because whoever won the tip (was) just holding the ball.”

Back then, overtime in college basketball worked the same way it does today: with an extra five-minute period. If the teams remain tied after those five minutes, they play another overtime. This continues until one team wins.

So, Cincinnati and Bradley literally held the ball for minutes at a time.

“Okay you get the tip, they held it, whoever got it then tried to score,” Buescher said. “If they didn’t score, then we’ll play another overtime. Whoever got the tip, held it. So they didn’t play. You get into two of those, and all of a sudden I said, ‘We could be here for a while.’ Which we were.”

The two clubs combined for just 22 points in 35 minutes of overtime. Neither scored more than four points in an overtime period. In the third frame, nobody scored at all.

“Possessions became gold,” said former Cincinnati guard Doug Schloemer, who hit the game-winning jumper. “I mean if you didn’t get a wide-open layup or an eight-to-10 footer, people weren’t taking it.”

“Our philosophy was that if we had a good, close shot, anytime, we would take it during the overtime,” Badger told NCAA.com. “Which we did.”

BEHIND THE BRACKET: How the field of 68 teams is picked for March Madness

“Once it got between four and five (overtime periods), it was more or less a spectacle,” Snell said. “Everybody was afraid to leave because they were watching something that usually doesn’t happen.”

“If anybody left, it was probably because they had to get their kids to bed or something like that — being a school night,” Snell said of the reported 7,300 in attendance. (It was a Monday, after all.)

Schloemer recalls feeling the tension build as the game wore on.

“I think most players will tell you, the crowd is really not much of a factor,” Schloemer said. “But you could feel the intensity as the overtimes mounted up. Definitely.” 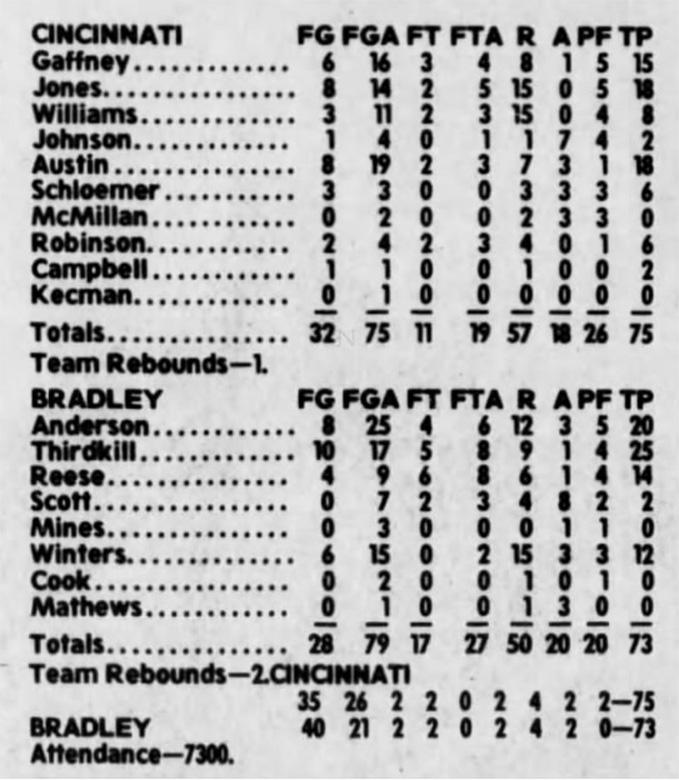 The box score from the game, published in The Cincinnati Enquirer on Dec. 22, 1981.

Coincidentally, it was also Schloemer who forced that seventh overtime in the first place. The Bearcats were down 73-71 late in the sixth overtime when he grabbed a defensive rebound and scored on the ensuing possession.

But it’s his game-winner that everyone remembers. He broke down how it happened for NCAA.com.

“I just know we had the ball and we called timeout,” Schloemer said. “The idea was just to work it around. I think (Bradley) was keyed in on Bobby Austin, who was one of our leading scorers.”

“Junior Johnson got it over to me and I barely got it off,” Schloemer said. “Time was running down and I just let it fly. Kind of one of those when you let it go, you knew it was going in.”

His dagger was a 15-footer that came with one second to play, according to Morris of The Cincinnati Enquirer. It gave the Bearcats a 75-73 lead, but the Braves had one more chance to push the game further into uncharted territory.

“We worked so hard, and we were on the road,” Badger said. “We didn’t want to make a stupid mistake and let them have an easy basket or anything. They were a good team, Bradley. That’s the year that they won the NIT. We played really well, too, coming down the stretch.”

The Associated Press story from the morning after the game.

Ken Rappoport of the Associated Press reported that Bradley center Kerry Cook missed an 18-footer as time expired. Had it gone in, an eighth overtime would’ve commenced.

The game took three hours and 15 minutes to complete, according to the Associated Press.

“I know we were just happy that it was over with, and there wasn’t a lot of jumping around either,” Gaffney said with a laugh. “We were just that tired.”

It was at that point when those involved learned of the historical significance.

“We were told after the game that it was a record,” Snell said. “We didn’t know that it would be.”

“It was right after the game,” Gaffney said. “I don’t know if it was the trainers, but somebody had mentioned something about we had broken a record.”

It’s a feat that has stood for 38 years, and has been challenged only once: Syracuse needed six overtimes to defeat UConn 127-117 in the quarterfinals of the 2009 Big East tournament.

“I definitely didn’t want that record to be broken,” Gaffney said.

“I really don’t. Especially with the way the game is played today with the fast pace up and down the court. You got the 3-point range, you got the shot clock now, I think it would be incredibly hard,” Gaffney said.

“It’s just something great to be a part of, knowing that you’re in the history books.”