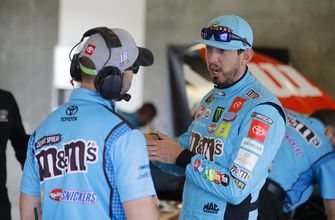 INDIANAPOLIS (AP) — The Latest on the Brickyard 400 at Indianapolis: (all times local):

The Brickyard 400 is under way, earlier than originally scheduled because of the threat of rain.

Kevin Harvick led the 40-car field to the yard of bricks from the outside row for the Cup’s regular-season finale.

Before the race, Kyle Busch and his team posed with the regular-season trophy he’s already clinched.

All eyes will be on Jimmie Johnson, who needs a strong performance to make the 16-driver playoff field. He’s the only driver to compete in every playoff since the format was implemented in 2004.