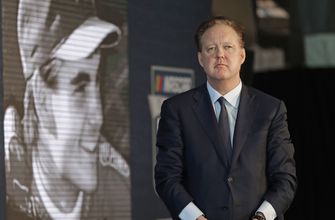 The Latest: Bruton Smith asks for support of NASCAR

CHARLOTTE, N.C. (AP) — The Latest on the arrest of NASCAR Chairman Brian France (all times local):

NASCAR star Kyle Busch is hoping the series can quickly move past the arrest of Chairman Brian France.

Busch had a media event Tuesday in South Carolina for Darlington Raceway and said he hopes France’s issues don’t “affect NASCAR in a negative way.”

France took a leave of absence following his Sunday night arrest in New York’s Hamptons on charges of driving while intoxicated and criminal possession of oxycodone. The arrest comes at a time NASCAR is desperately trying to stop a slide in popularity.

“We’ve got to look to our sport’s future, what we can change and what we can do next,” Busch said. “Brian’s been our leader for a long time. Look forward now to the opportunity to have Jim France in there.”

Busch has won six Cup races this season and is a series champion.