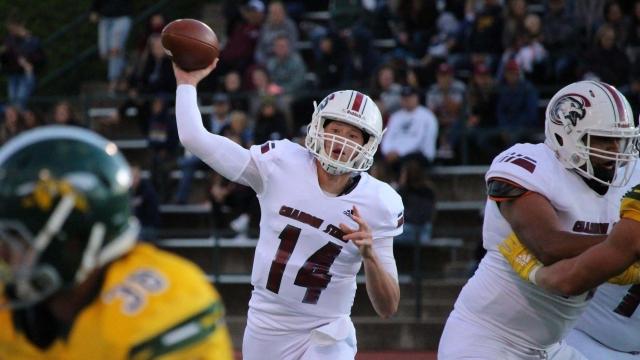 
College football returns to Division II on Saturday, Sept. 26, as Angelo State and West Texas A&M meet to kick off the new season. But like most things in 2020, this season will not be ordinary. Only a handful of teams are participating. Schedules are abbreviated, so much that some programs will play each other more than once, doubling up some rivalry action while FCS teams also factor in as a common opponent. To help you best navigate the season, here is a guide to DII football in 2020.

How will the 2020 DII football season work?

As of Sept. 22, there are nine Division II teams scheduled to play football this fall. At this time, teams are slated to play as few as four games and as many as six. The first game is Sept. 26 while the last kickoff of the season will be Nov. 28.

If it looks like there are duplicate games on the schedule, that’s because some teams are going to play an opponent more than once. One notable pairing that we’ll see twice this year is South Dakota Mines against Black Hills State, better known as the most played rivalry in DII football history. Games 135 and 136 of that series will both go down in 2020.

You also might also be wondering why there are some FCS programs showing up on schedules. Due to proximity and past history, Stephen F. Austin and Abilene Christian should be on your radar this season, but not just for the number of Division II teams they’ll play.  Last year DII pulled off 10 upsets over FCS  teams, including five alone on Sept. 10, 2019.

Here’s every DII vs. FCS game scheduled this season:

Which DII teams are playing this season?

Here’s a look at some of the top returning players for each team as well as a complete schedule:

Note: Competition against NAIA opponents is not listed below.

Angelo State — The Rams will look a lot different offensively after going 8-3 in 2019. But the defense, which allowed less than 15 points per game, could be even better this year. Angelo State has its leading tackler back in linebacker Hunter Kyle while defensive backs Darrius Dickerson, DeShaun Douglas and Devin Washington give the Rams one of the more experienced secondaries among the teams playing. The trio combined for nine interceptions and 28 pass breakups last season.

Black Hills State — The Yellow Jackets are looking to bounce back after going 3-8 in 2019. A year ago, Black Hill State struggled to find consistency at the quarterback position. The starting job is likely to come down to redshirt sophomore Chance Eben or junior Tyler Hammons after both made at least seven appearances. Whoever wins the job will get the benefit of having a steady top target in senior Kielar Harpham (729 yards, six touchdowns in 2019).

Chadron State — After a 6-5 campaign in 2019, Chadron State and its high-powered offense are back in 2020. Quarterback Dalton Holst is back for his senior season after throwing for 3,114 yards and 33 touchdowns last year. The 2019 Harlon Hill Trophy nominee will be joined in the backfield by running back Elijah Myles, who finished with more than 1,000 yards and 12 rushing touchdowns a year ago. Tevon Wright is gone from the receiving corps, which means there’s an opening to be Holst’s No. 1 target. Don’t be surprised if senior wideout Cole Thurness steps into that role.

Colorado Mesa — The Mavericks finished 6-5 last season, but there are reasons to be excited coming into the new year. After averaging more than 34 points per game, quarterbacks Aaron Howard and Hayden Bollinger return to lead the offense. Both signal-callers appeared in double-digit games and complement each other well as Howard is the more effective passer while Bollinger is a dual-threat option. The duo will be supplemented in the backfield by the three-pronged rushing attack of Isaac Maestas, Jesse Rodriguez and Trey Windham, who each averaged over 4.5 yards per carry in 2019.

South Dakota Mines — The Hardrockers went 3-8 a year ago, but then again, most of their biggest contributors in 2019 were underclassmen. Another year of experience could be helpful for quarterback Toby Smith as he returns for a second season under center with South Dakota Mines’ four leading receivers back too. Running back Ahmad Lewis will likely be the focus of the offense after rushing for 1,385 yards and nine touchdowns last year. Defensively, the Hardrockers have six players back who made double-digit appearances.

Missouri Western — With a 9-3 record last year, the Griffons produced the most wins of any team returning to the gridiron in 2020. Missouri Western did most of its damage on the offensive side of the ball, but there’s going to be some personnel changes this year. Sophomore quarterback Anthony Vespo is likely to step into the starting role with Wyatt Steigerwald gone. Vespo threw for 411 yards and three touchdowns in limited action last season. He’ll have three of the Griffons’ top four wideouts from 2019, which should help establish chemistry early on. Shamar Griffith was one half of the program’s two-man rushing attack a year ago, producing 826 yards and four touchdowns. Markel Smith graduated, meaning Griffith could see a significant uptick in touches. Also make sure to keep an eye on All-American returner Trey Vaval, who took two kicks to the house as a freshman.

Nebraska-Kearney — Much of the Lopers’ offense from last year’s 7-5 team is gone. Quarterback T.J. Davis returns and figures to be one of the more dynamic dual-threat signal callers in Division II after rushing for more than 1,000 yards and scoring 16 touchdowns on the ground a season ago. The run game could be a big part of Nebraska-Kearney’s game plan in 2020. While David Goodwin and Darrius Webb are a tough duo to replace, redshirt senior Dayton Sealey could be due for a breakout after running for 705 yards at better than eight yards per carry in 2019.

Pittsburg State — The Gorillas averaged over 40 points per game in 2019, a season in which they finished 6-5. A majority of the the contributors are coming back, most notably quarterback Mak Sexton. The sophomore threw for 1,694 yards and 13 touchdowns last season and will have a chance to take a step forward in his second year under center. Pittsburg State also returns all three primary ballcarriers from its run game. Tyler Adkins, Brandon Mlekus and Tucker Horak should all factor into the equation again after combining for 1,663 yards and 21 rushing touchdowns last year. Sexton will need a new No. 1 target with Lorenzo West and Brenner Clemons gone. Look to junior Bryce Murphy to potentially become the go-to option.

When does the DII football season start?

West Texas A&M technically kicked off the 2020 season on Sept. 19 with a win over NAIA opponent Oklahoma Panhandle State. On Saturday, the Buffaloes and Angelo State play the first football game between Division II opponents since West Florida and Minnesota State battled for the DII football championship on Dec. 21, 2019.

The teams kick off from LeGrand Stadium at 7 p.m. ET on Saturday, Sept. 26. Angelo State is expected to allow up to 50 percent capacity for attendance in what will be its only home game of the season.

Angelo State won the 2019 meeting 17-14 as both teams finished 8-3 a year ago. But unlike previous seasons, Saturday’s meeting won’t be the last until 2021. The teams will play again on Oct. 24. Scheduling multiple games against the same opponent is unorthodox. But then again, so is this year in sports.

Is there a DII football championship?

While teams can participate in a fall football season, there will not be a DII football championship in 2020. The Division II Presidents Council announced on Aug. 5 that all seven DII fall championships are canceled.