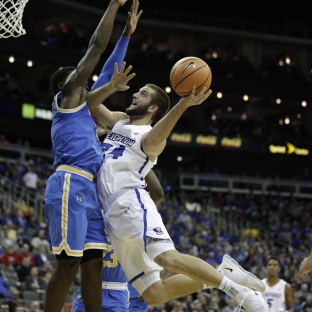 1. The surprise of the Maui Invitational may just be…..LSU. And if this keeps up, the Tigers could suddenly be a much bigger pest in the SEC. Oh, and it would prove that the Tigers got the hire right in Will Wade. OK, slow down. But LSU did knock off Michigan in the Maui quarterfinals Monday night. Tremont Waters did score 21 points. He did bury a bucket and then create the next with a sweet dive on the floor, assisting to Skyler Mays. That succession of plays put the Tigers ahead in the final 1:14.

Wade said after the game, “We turned the page on our program tonight.’’ How much impact can these non-conference tournaments have on a program? Quite a bit, as you can see. Waters is averaging 17.7 points and six assists in his freshman season so far. The Tigers have five players averaging double figures. And maybe most importantly, they came up with a defensive stop when they needed it most. Now comes Notre Dame tonight in the semifinals, a team that consistently is hard to defend. If the Tigers were to advance to the final, then the SEC just got much deeper than anyone projected.

2. UT Arlington will continue to get play here in the Daily Word if the Mavericks duplicate what it did at BYU last Saturday with a 14-point win. Well, a sneaky good game exists tonight when the Mavericks play at Alabama. The Tide will be an SEC contender. Book it. Collin Sexton is that good. Alabama will get a major test Saturday in Brooklyn against Minnesota. But the game tonight against Kevin Hervey and the Mavericks may be just as difficult due to the mental approach needed. Alabama cannot sleep on Arlington and Hervey, averaging 25.5 points a game. Erick Neal is putting up 17.5 a game, too. This game will test the Tide as much as the brand names they’ll face throughout the season. Get a road win at Alabama and Arlington will start to be in at-large resume status out of the Sun Belt.

Hamilton with the alley-oop dunk for @utarlington.

3. Penn State, this is your chance. Now. Tonight. Texas A&M. Legends Classic. Barclays Center. Brooklyn. If the Nittany Lions want to make a statement that they have to be taken seriously in the Big Ten then beating the Aggies – a possible contender for both the Final Four and SEC championship – would do it. Tony Carr is averaging 19 points per game. Lamar Stevens has seven blocks in five games. This squad has the pieces. Destroying Pitt in the semifinals was a good look. Take down Texas A&M and not only the Big Ten will pay attention but also the teams in the Top 25, since the Nittany Lions would deserve a spot.

4. No one needed to be convinced Creighton was legit. The offensive juggernaut showed itself by putting up a century on UCLA Monday night at the CBE in Kansas City. But Baylor? Well, this was supposed to be a rebuild. And it still may, but the Bears yet again (What is it about the Bears, Waco and a team that is always long and athletic? They seem to have one every year) have the look of a top-four Big 12 finisher. The length in the zone really frustrated Wisconsin on Monday night. Will it against the Bluejays? Manu Lecomte is as stable a point guard as there is but it’s the size and wing span of Jo Lual-Acuil Jr., Nuni Omot, Terry Maston and Tristan Clark that will make this team formidable.

5. The Atlantic 10 is in need of a quality non-conference win to go along with Saint Louis’ victory over Virginia Tech in the 2K Classic last week. VCU stumbled at the Maui Invitational against Marquette and already lost to Virginia at home. Rhode Island is missing E.C. Matthews and fell at Nevada in the game in which he got hurt. St. Bonaventure didn’t have Jaylen Adams and lost to Niagara at home. None of these losses should sting when viewed by themselves considering the circumstances. But here comes Davidson tonight at Nevada. The Wildcats could end up being one of the toughest teams for the Wolf Pack (outside of when they play at Texas Tech or against TCU) to defend. Davidson has three, yes three, 20-point scorers through two games in Peyton Aldridge, Kellan Grady and Jon Axel Gudmundsson. Davidson doesn’t need to win at Nevada to be considered an A-10 title contender. But national perception would/should change with a true road win.

Share. Twitter Facebook Google+ Pinterest LinkedIn Tumblr Email
Previous ArticleWomen's basketball: Unbeaten Villanova is the NCAA Team of the Week
Next Article College Football Playoff: Which teams have been ranked the most in the playoff era?