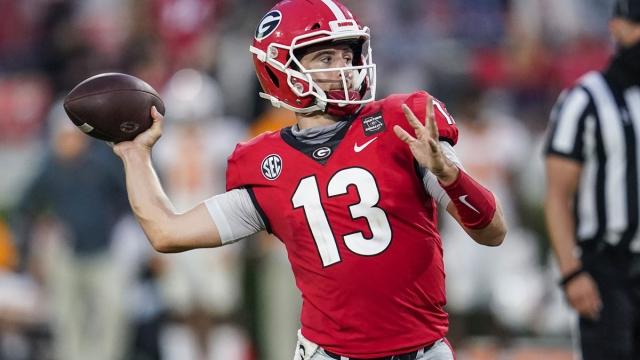 
We’re ready for Week 7 of the college football season, which might as well be titled Alabama vs. Georgia Week. The marquee meeting is the biggest game of the year so far, and might hold that title for a long time.

Here’s what you need to know for Week 7, including top games to watch, big questions and the current Top 25 rankings.

Of BYU’s remaining six games, this is right up there with Boise State (Nov. 6) and San Diego State (Dec. 12) as the toughest left. Last week, the Cougars looked less than dominant for the first time all season with a 27-20 win against UTSA. Now BYU meets Houston, which finally opened its season with a 49-31 win against Tulane after earlier postponements.

The Cougars should get out of Texas with a win thanks to QB Zach Wilson (1,241 passing yards, 14 total TDs), but it won’t be easy.

Through three games, Cincinnati again has one of the top defenses in the country. That could be enough for the Bearcats in a challenging conference game.

Tulsa has already defeated one ranked AAC team this season (then-No. 11 UCF) and almost started the season with an upset at then-No. 11 Oklahoma State. So the Golden Hurricane won’t be fazed by the opportunity. Things would get messy in the AAC if Tulsa pulls another upset.

Here’s another game in the AAC, since both teams lost national rankings after an early season loss in conference play. That means the margin of error is incredibly slim going forward.

The winner should be in good position to think it has a chance to play for a conference championship. The loser won’t be out of the chase, but it would be difficult to make a run. One thing is for sure — get ready for plenty of points with QBs Dillon Gabriel and Brady White.

Florida State owned the series once it joined the ACC, taking 13 of the first 14 meetings. But UNC is now hoping to win three in a row dating back to 2010.

Following a slow start — at least when looking at preseason expectations — UNC’s offense erupted for 656 yards and 56 points against Virginia Tech. QB Sam Howell and RB Michael Carter should have fun against a Seminoles defense that just allowed 42 points and 353 rushing yards to Notre Dame.

But some things do look different now than they did prior to the season starting. Alabama’s Mac Jones has 1,101 passing yards and Najee Harris is up to 347 rushing yards and 10 touchdowns, but the Crimson Tide’s defense doesn’t look like its usual dominant self. Allowing Ole Miss to score 48 points is both eye-opening and concerning.

In Georgia, Stetson Bennett is the starting quarterback and has been great against ranked Auburn and Tennessee in back-to-back weeks, throwing for a combined 451 yards and three touchdowns without an interception. Alabama may still find a way to beat the Bulldogs for a sixth time in a row, but it will not be easy. Expect another one like that classics in 2012, the national title game in the 2017 season and the 2018 SEC Championship Game.

How much will the Alabama-Georgia game change the CFP chase?

Through six completed seasons with the College Football Playoff, only one conference has gotten two teams into the semifinals in one year.

That was the SEC, when both Alabama and Georgia made it to the 2017 field — and eventually played for the title. This year, with COVID-19 and different schedules, could yield the same result.

The winner of this week’s game could easily afford to slip up once later in the season and regroup to win the SEC — or not lose until the SEC title game (maybe in a rematch?) and still make the semifinals if everything breaks right.

The loser may have to win out, if past seasons are strong evidence. No two-loss team has ever made the CFP field, and if Alabama does lose this weekend, the Tide will remain in the hunt until they get a “2” in the loss column. That’s they way it is every year with ‘Bama.

Of course, things may come down to how they often seem to be: Georgia must get by rival Florida; Alabama must beat rival Auburn. So while the loser’s path to the CFP gets a win-out look, that path is still there.

Is Clemson more dominant than ever?

Don’t want to say the Tigers are “better” than they ever have been, but it’s clear the gap between them and the rest of the ACC remains large. Yes, Notre Dame is now in the conference (for at least this season), but Clemson is Clemson and everyone else is fighting for second.

In a year with so much uncertainty with postponements, COVID-19 positive tests and contact tracing, limited attendance and more, Clemson has an edge no one else has: Trevor Lawrence and Travis Etienne. That counts for a lot.

Because of their positions, chances are two of the best — or the two best — players will touch the ball quite often when Clemson has the ball. In the 42-17 romp against Miami, a play ended with a Lawrence throw or run or an Etienne run 66 times. That’s 75 percent of the Tigers’ offensive plays ending with one of those results. Good luck, everyone else.

Throw in a defense that allowed only 210 yards and forced three turnovers, and you’ve got a juggernaut. Yes, Notre Dame looms the first Saturday in November. But Clemson appears to be unstoppable to 11-0, at least in mid-October.