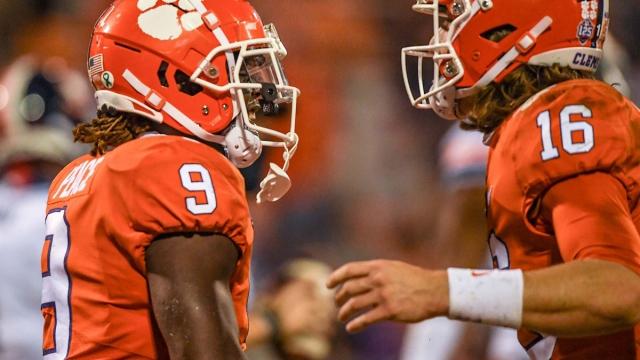 
We’re into October, where the ACC and SEC give fans some major ranked showdowns. There are four ranked vs. ranked matchups in Week 6, which will lead to significant changes to the conference races and the AP Poll.

Here’s a look at what to watch for in Week 6, including top games, a preview and the weekly rankings.

Can anyone slow down Kyle Trask? The Florida quarterback has already become one of the early Heisman favorites thanks to a ridiculous start to the season. Through two games, Trask has 684 passing yards with 10 touchdowns while completing 71.8 percent of his passes. There’s a good chance he’ll have another big game here, even if it’s on the road.

Texas A&M has a strong quarterback of its own in Kellen Mond, but the pass defense struggled against Alabama last week: 435 yards allowed. This is the start of three tough games over the next few weeks for the Gators. Florida plays LSU next week and Georgia on Nov. 7.

The Clemson-Miami game is getting the most attention in the ACC, but this definitely matters in terms of positioning in the ACC standings. The top two teams by highest win percentage in conference games will play for the conference title.

Virginia Tech ranks third in the country in rushing yards per game at 319 yards and leads the nation with 7.0 yards per carry. Though UNC has QB Sam Howell, the Tar Heels’ run defense will be what could decide things.

After two games, North Carolina is allowing only 54 rush yards per game.

What previously looked like one of the best games of the month has now fallen apart.

Texas survived with a crazy rally at Texas Tech…before falling to TCU last week. And Oklahoma coughed up a big lead at home to Kansas State…and then lost again at Iowa State. It was OU’s first loss in Ames since 1960.

The Sooners have won five consecutive Big 12 titles, but another loss would put them at 0-3 and likely out of the picture. One thing is for sure, OU will need to fix its defense to slow down Texas QB Sam Ehlinger.

The Bulldogs looked like the national title contender most people assumed they would be when they crushed then-No. 7 Auburn 27-6 last week. QB Stetson Bennett delivered with 240 passing yards and a touchdown without throwing an interception. UGA’s ground game also improved from the Arkansas game, picking up 202 yards.

But now comes somewhat of an unknown. Just how good is Tennessee? Going back to last season, the Vols have won eight games in a row. But none of those have come against ranked teams. Georgia has won the last three in the series by an average of 32 points.

Here’s the big one. Clemson has won every ACC title going back to 2015 and looks ready to win again in 2020. A loss won’t end Clemson’s hopes of winning another crown, but it would mark a notable climb for Miami.

The Hurricanes went 6-7 just last season, losing to FIU, Duke and Louisiana Tech to end the season. But thanks to wins against UAB, then-No. 18 Louisville and Florida State to open 2020, Miami is inside the top 10.

Just how high could BYU go in the polls?

Perhaps no team has been consistently dominant this young season like BYU, give or take a Miami. The Cougars beat Navy by 52 in the opener and then defeated Troy by 41 and Louisiana Tech by 31.

Cougars QB Zach Wilson is completing 84.5 percent of his passes while throwing for 949 yards. Voters have taken notice, too. Despite starting the season unranked, BYU is now No. 15 in both the AP and Coaches Polls.

So what’s the ceiling? The good news is BYU might have among the best chances of anyone to finish the regular season undefeated. The bad news is part of that is because of the schedule. Sure, future games at Houston (Oct. 16), at Boise State (Nov. 7) and vs. San Diego State (Dec. 12) won’t be easy, but that also means BYU will be short on statement game opportunities. Add it all up, and BYU could be moving into the top 10 soon. But top five seems like a bigger question mark, no matter the margin of victory.

One thing that could help? Chaos. If more conferences start seeing surprises like the Big 12, BYU will be ready to rise.

It’s no longer Oklahoma and everyone else.

The Sooners have won the last five Big 12 titles, but an 0-2 start in conference play will make it very, very difficult for OU to stretch it to six. And expected top challenger Texas is now in the middle of the pack (admittedly early in the season) at 1-1.

Oklahoma State, Iowa State and Kansas State are the three remaining conference undefeated teams, all 2-0. The Cowboys are now seemingly the favorite, with that close win against Tulsa looking better after the Golden Hurricane shocked UCF in Week 5.

We’ll know more after OU-Texas this weekend. The Sooners are really in must-win mode from here on out, while Texas would clear a huge hurdle with a win. But OU and Texas’ losses mean the Big 12’s best College Football Playoff hopes don’t belong to the expected top-two favorites.