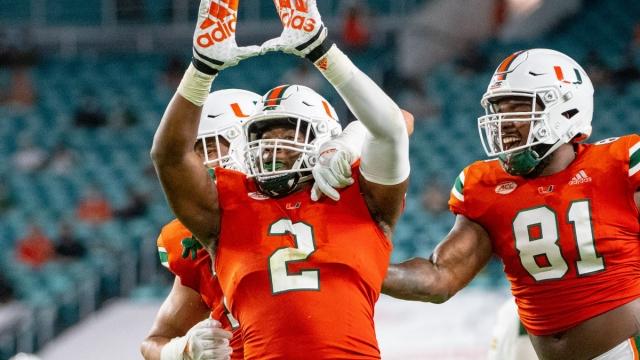 
We’re into mid-September and Week 3 of the 2020 college football season. The season remains young, but there have already been surprising upsets — and the SEC is only one week away from starting its season.

After Louisiana and Georgia Tech took headlines last week, both the Ragin’ Cajuns and the Yellow Jackets hope the winning continues in two of the week’s most intriguing games. Here’s a look at Week 3:

That was the last time Louisiana had been ranked. Until now.

Georgia State is playing its first game of 2020, but the Panthers shocked Tennessee last season before finishing 7-6. The offense will have new starters at quarterback (Cornelius Brown IV) and running back (Destin Coates), but the Panthers return eight starters on both sides of the ball.

One goal for Georgia State will be to limit Louisiana’s big plays. The Ragin’ Cajuns scored touchdowns on a 95-yard kick return, 78-yard touchdown pass from Levi Lewis and an 83-yard punt return at Iowa State.

These teams weren’t supposed to meet. But the Baylor-Louisiana Tech and Houston-Memphis games had to be postponed because of COVID-19, thus allowing the former SWAC rivals to meet up for the first time since 1995.

Meanwhile, Baylor has a new head coach in Dave Aranda, previously the LSU defensive coordinator during the Tigers’ CFP title run. He will have some leaders to rely on, however, in QB Charlie Brewer (3,161 passing yards, 21 passing TDs, 11 rushing TDs) and LB Terrel Bernard (112 tackles, 4.5 sacks).

Notre Dame won its first conference game in history last week, a 27-13 win at home against Duke. After this non-conference game, the Irish return to ACC competition next week. They have won 19 in a row at home, tied for the second-longest streak in Notre Dame Stadium history (opened in 1930).

But South Florida did win at No. 16 Notre Dame in 2011, so the Bulls have done the unlikely before. If first-year coach Jeff Scott’s team can beat the Irish again, it will be USF’s first win against a top-10 team since 2007 (No. 5 West Virginia).

Year 2 of the Geoff Collins era at Georgia Tech couldn’t have started more promising. The Yellow Jackets rallied from an early 10-point deficit to win at Florida State. Freshman QB Jeff Sims overcame two interceptions to throw for 277 yards and a score while the defense allowed only 13 points, 307 yards and forced three turnovers.

But UCF should be a more difficult assignment. QB Dillon Gabriel is now a sophomore after his 3,653 passing yards (29 TDs, 7 interceptions) in 2019. The Knights are again an AAC contender, but Cincinnati and Memphis hope to have something to say about that.

The Mountaineers rushed for 308 yards against Charlotte last week and now have to go on the road. Still, after all the Top 25 change, Appalachian State is again ranked.

This should be a fun QB matchup. Appalachian State features senior QB Zac Thomas, who had 204 passing yards and a touchdown against the 49ers. Marshall freshman Grant Wells had a memorable debut in Week 1 vs. FCS Eastern Kentucky — he hit his first eight passes and closed with 307 passing yards and four touchdowns.

Though Louisville surprised many by winning eight games in 2019, they were rocked by 28 points against Miami. However, Jarren Williams and his six touchdowns passes from that day are now gone after a transfer. Instead, Houston transfer D’Eriq King is the must-stop target. King has a record 16 consecutive games with at least one passing and one rushing touchdown.

Both teams probably see this as a game they have to win to potentially play for the ACC crown.

What does the Big Ten’s return mean for the CFP?

The Big Ten announced this week that its season will begin Oct. 23-24, adding new drama and inevitable debate into the national title chase. The conference will have an eight-game season that leads into the conference championship.

Could Oklahoma have a new star at quarterback?

First was Baker Mayfield, who almost hit 4,000 yards while Riley was OC in 2016. In 2017, Mayfield then upped his numbers to 4,627 and 43 touchdowns through the air and five touchdowns on the ground. He won the Heisman.

Jalen Hurts then finished second in the Heisman voting in 2019 as he passed for 3,851 yards and 32 touchdowns while rushing for 1,298 yards and 20 touchdowns.

Could Spencer Rattler be another Heisman finalist for OU? In his first start, Rattler was 14-for-17 for 290 yards and four touchdowns against FCS Missouri State.

Even if Rattler’s numbers fall a bit against Big 12 teams, one thing is more certain — Oklahoma is the top team in the Big 12. Again. That’s should be some consistency in an understandably uncertain 2020.